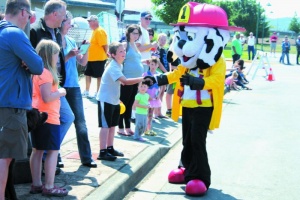 Last weekend's Willapa Harbor Festival brought the community together with great music, food, and activities for all ages.

Festival organizer and Willapa Harbor Chamber of Commerce Director Michelle Layman was very pleased with the success of the celebration. "It was crazy and great. We had a lot of people and I've heard a lot of really great feedback," she said.

In perhaps the highlight of the weekend, the celebration kicked off Friday night with the ever-popular band, Humptulips. A crowd of music lovers, kids, and families gathered to listen to the "country band with a twist of rock" in what some have called the best concert in this area. A family friendly event, Humptulips provided tunes for the community dance. Children and adults alike danced around the grass to the beats.

Saturday morning brought the area's first ever mud run, a 5k running event put on by Mudtown, a new gym in town. Participants completed a full three-mile race to begin with, ending with an obstacle course full of muddy challenges. Runners laughed together as they crawled through a muddy pit, high-kneed through a tire maze, and shuffled over a mud-filled tarp. Mudtown owner Jessica Porter explained that the turnout was great. "In the future, I'd love to have something up in the woods," she said.

In a flash back to the old days, the Classic Car Show at South Fork Landing drew a crowd. From a 1923 Ford Model T, and 1940 Ford Model A, to a 1969 Chevy pickup, and new Chevy Camaro convertible, the event showcased a plethora of classics.

Blue, red, yellow, and purple floral designs, crafted with love and attention - the quilt show at the Raymond High School flaunted the works of great quilt makers from Pacific County. Featured quilter Dorothy Gruginski filled the expansive stage of the cafeteria with over a dozen of her lovely creations, wowing quilt lovers with her dedication and craftsmanship.

As the clock struck noon, the parade in downtown Raymond commenced. Over 20 local vendors lined the street where the parade took place and kids and adults alike were pleased with the old cars, ambulances, fire trucks, cheerleaders and a horse drawn carriage rolled through town.

Slater's Diner delivered the winning chowder at the Chowderfest sponsored by the Willapa Chamber of Commerce, serving up a scrumptious dish of creamy, potato and clam stuffed chowder. Other delicious entries came from Pitchwood, 101 Public House, and the Tokeland Hotel, tickling the fancy of chowder lovers from all around.

A weekend-long battle of the bands brought in musicians to compete for large monetary prizes. At the battle finale Sunday afternoon, Project Lionheart came in first place winning a $1,500 prize sponsored by the Pitchwood. Second place was Weather Machine, receiving $1,000 from the Willapa Harbor Festival; third place was McDougall with a $600 prize from BMFA; fourth place was Caryn Jamison winning $500 from Harley's Bar N' Grill; fifth place was Amadon with $400 from the 101 Public House; and sixth place was Hat Trick winning $300 from Kaley Hanson and family.