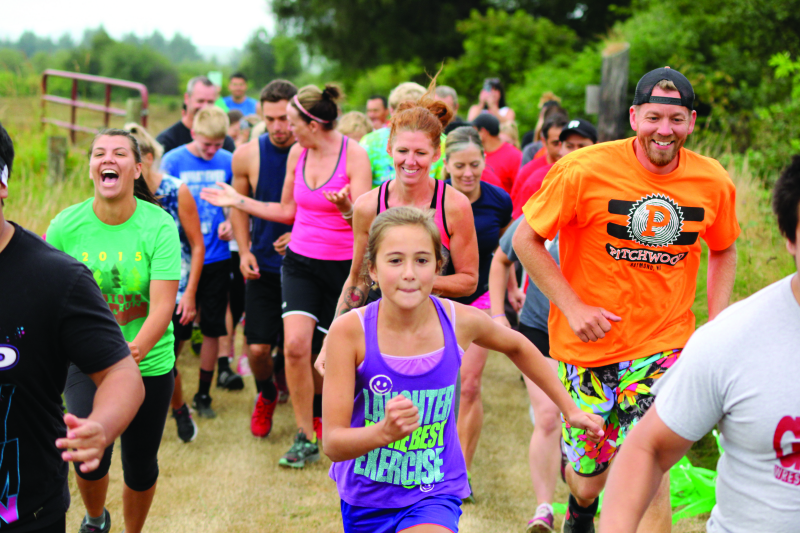 Runners at the start of the Mud Town Fitness Mud Run out at the Raymond Airport. It was a great start to the weekend festivities having fun in the mud.

The community of Raymond was treated this past weekend with the annual Willapa Harbor Festival.

Residents were entertained with a parade, live music, plenty of food and drink as well as a softball tournament and a mud run.

With festivities starting on Friday, organizers Kaley Hanson and Michelle Layman scheduled three packed days of fun and festivities that is starting to grow.

"We brought more things for the kids this year," said Layman, "with the kid train and bouncy houses, we hope to continue to expand that next year."

There would have been more activities but with the hot weather the kids fishing pond did not make it, as the fish were unable to stay fresh in the pool. But with the addition of kids shows like Eric Herman during Sunday's Family Day, there was plenty for the kids to get involved in.

"We hope to keep it growing," noted Hanson, "it is a goal of mine to hopefully have a Ferris wheel and maybe carnival rides in future festivals. We are also looking at bringing in more music. I think we have hit on the right formula, we are just going to improve it each year."

Festival Central
The core of the festivities housed a main stage for several musicians performing during the three-day event. All merchandize and food vendors established the perimeter of the grounds with the beer garden right next to the stage. At one end of the block kids activities like bouncy houses and face painting and Henna art were going on all weekend as well as the stop for the newly established kid train.

With music and entertainment running the duration of the festival the mix of offerings gave the event a true festival feel. Covered picnic tables made the sunny weather more bearable and encouraged festivalgoers a place to sit and enjoy the food and fun. On Saturday the ever-popular Home Brew Contest brought out some very flavorful brews. This years winners were - Dan and Joe Hanson with their IPA, second was Ryan Porter and his Pale Ale and last years winner, Buddy Warren took third with a Belgian White.

With the Wood on the Willapa Softball Tournament running out at the Eighth Street Park, visitors could visit the main festival area and take a ride in a horse drawn carriage provided by the Historical Carriage Museum. There was also a classic car show on the lawn area outside of the Carriage Museum parking lot and even try out a kayak at the newly established Willapa Paddle Adventures.

Saturday was kicked off with a pancake breakfast by the Raymond Fire Department raising money for their charity, MDA. And those ready to really start their day headed off to the Raymond Airport for a mud run put on by Mud Town Fitness.

The Mud Run
Double the participants from the previous inaugural year, the Mud Town Fitness Mud run had two courses set up for adults, a 5k, and children at one mile. Both having 10 obstacles to challenge the participants, the kids came back a little more muddy then their parents.

"I think the community is seeing that we can hold activities like this (the mud run) and it will only get bigger in the future," said Jessica Porter of Mud Town Fitness.

AT the top of her list of groups to thank was the Port of Willapa for allowing the course to be set up at the Raymond Airport, the Raymond High School wood shop for assisting with the obstacles and the members of the Willapa Harbor Festival for allowing her to hold the course during the festival.

"A very special thank you for the members of Mud Town Fitness who helped me get this course established and doubling the course from last year."

Porter noted that there was a long list of people and groups that she needed to thank for the success of the morning event, and that each would be getting a personal thank you form Mud Town Fitness in the next few days.

"And next year it is going to be even bigger," said Porter.

Wood on the Willapa
While some were out tackling the obstacle course at the airport, other local athletes were swinging their bats for the annual Wood on the Willapa coed softball tournament. The tournament raises money for the Willapa Harbor Girls Softball Association. The third annual tournament brought in six teams that ran through round robin play on Saturday with the championship tournament on Sunday. Taking the field at 9 am, Saturday, two fields of play were established at Raymond's 8th Street Park. The day was broken up so that players could watch the Parade held in downtown Raymond and then reconvened just after 1 pm and the start of the double elimination brackets for the championship. With the first and second place teams established after the round robin, Balls Deep and PUI (Playing Under the Influence) both received a bye through the first round of the double elimination bracket.

Pac Co Fog and the Ice Cold Pitchers took early wins in Saturday afternoon play sending the Sultans of Swat and Down n' Dirty into the bottom bracket to see who they would face from early Sunday games. Pac Co Fog drew Balls Deep as ICP had to face PUI in the first games. ICP handed PUI their first loss pitting them against the Sultans. PUI advanced to meet the Sultans eliminating them and waiting for the result of the Pac Co v. Balls Deep match. Pac Co dropped to Balls Deep and had to get through Down n' Dirty which they did, eliminating the second team from the tournament.

The afternoon games saw Balls Deep get past ICP and PUI defeat Pac Co Fog. With one loss each PUI and ICP played to see who would play for the championship against Balls Deep. In a close match, PUI pulled out an impressive late inning shutting down the Ice Cold Pitchers. For the final game see the Sports section.

The Parade
There was plenty to see during the Willapa Harbor Festival Parade that took 30 minutes to get down the populated street in downtown Raymond. From local businesses to political groups, there were floats from the Pacific County Fair, Swiss Society, Dairy Ambassador, Raymond High School Cheer Leaders, Raymond American Legion, classic cars, with police and fire vehicles from both Raymond and South Bend. And there was plenty of candy to be scooped off the street as kids of all ages scrambled to gather as much as they could. Balloons were popular and added a great feature to the parade as kids batted them around as parade participants waved and tossed out more goodies. People got their first look at the Kid Train that would be a first at the festival this year and people had a great time giving the Willapa Harbor Festival an official start to the weekend.