Volunteers help prepare Vader PD for use as Sheriff’s substation 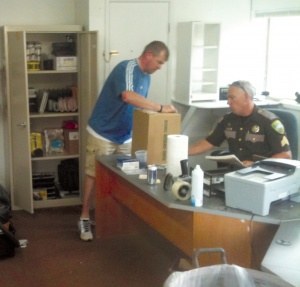 Lewis County Sheriff’s Deputy Bill Radtke (left) helps St. Robert Snaza (right) sort through paperwork left in a desk at Vader’s Police Department headquarters Saturday as part of efforts to clean and organize the facility for use as a deputy substati

A group of local volunteers spent Saturday helping clean out Vader’s old police headquarters to allow its use by Lewis County Sheriff’s deputies.

The Sheriff’s Office is currently providing regular patrols and 911 responses in Vader and deputies plan to use the headquarters as a substation while serving the community.

According to Vader Mayor Ken Smith, the facility had been largely used for storage in the absence of a Vader Police Chief, a position vacated after the resignation of Sean Uhlich in 2011, and housed a great deal of unused equipment, evidence and police reports.

The evidence has since been organized and placed in the custody of Lewis County Director of Property Management Isabelle Williams, while Williams and others prepare the headquarters for use by deputies and potentially a new Vader Police Chief in the future.

Williams said she has been able to help other cities in Lewis County prepare and organize their headquarters such as Napavine, who built a new City Hall facility in 2010, which incorporated a new headquarters and courtroom. She said she is working with Vader on a complimentary basis and simply enjoys helping to keep such facilities clean and organized.

Other volunteers from the Vader area, as well as with the Sheriff’s Office, were on hand to clean out patrol cars, empty closets and shelves, catalogue police reports and vacuum floors. Williams said, "While there are too few jobs for a large group of volunteers to help when work continues this Saturday, a handful could still be needed as they prepare the headquarters for use.

"Many hands make the work light," she said, stating such small towns as Vader can regularly use the help of volunteers for many projects throughout the year. "They [cities] really need their citizens and volunteers."

To find out what jobs still need assistance, contact Vader City Hall at (360) 295-3222 and ask how you can help clean out the headquarters. Williams said donations of plywood, 2x4s and 2x6s could be used as volunteers create shelving capable of maximizing the space available in the facility. 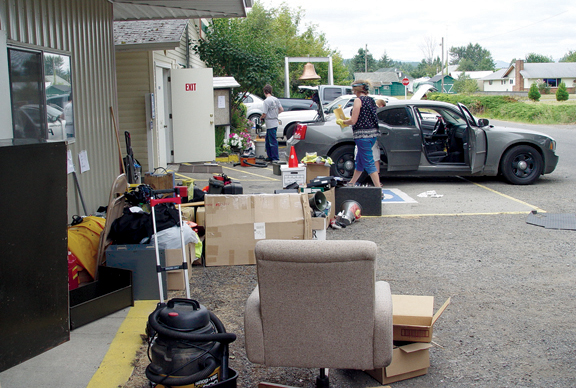 Volunteers help clean out patrol cars and organize equipment stored in the building so floors and surfaces can be cleaned. They said they were amused by passers-by asking if the equipment was for sale, as the cleaning took place the same day as Vader’s City-Wide Yard Sale. 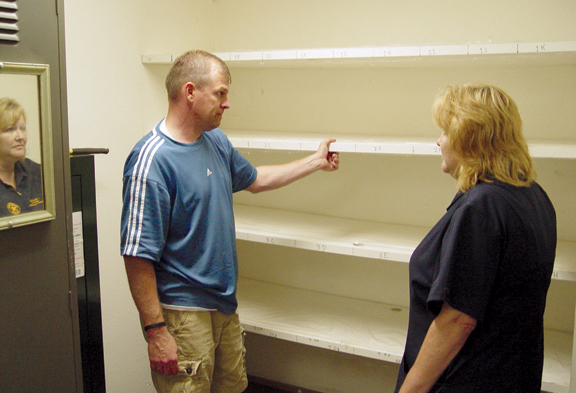 Radtke (left) and Lewis County Director of Property Management Isabelle Williams (right) discuss how to best reconstruct a set of shelving so the future storage of equipment, files and evidence can make the most efficient use of the space available. Williams said donations of plywood, 2x4s and 2x6s would be very helpful to the city.