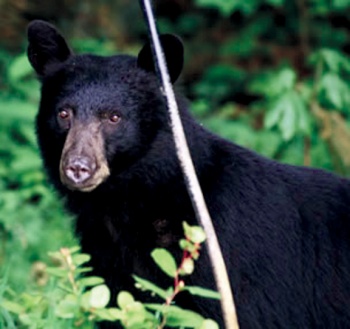 A black bear similar to one located recently in Vader, photographed by the Washington Department of Fish and Wildlife. Residents are being told to avoid leaving food and trash outside for the animal and to report sightings to authorities.

A large black bear has been sighted within the city of Vader and residents are being warned to exercise extreme caution.

First seen in the vicinity of A. St. May 16, a male bear estimated to be at least several hundred pounds in size has been popping up around town with at lest four sightings reported to officials so far. Residents are being urged to not approach the bear or attempt to neutralize it, as discharging a firearm within city limits is still illegal, but instead to contact authorities upon witnessing the creature.

“It’s very important, at this time, [for residents] to keep their trash cleaned up because there’s been a bear sighting in the neighborhood and they like to come where they find trash,” said City Council Member Kevin Flynn, who was the first official altered to the initial sighting of the bear and watched himself as it lingered in a resident’s back yard before returning to the surrounding woods.

The Washington Department of Fish and Wildlife agrees that trash, as well as pet food and birdseed, attract dangerous animals such as bears and should be stored indoors or in animal-resistant containers.

“Bears usually avoid people, but when they do come into close proximity of each other, the bear’s strength and surprising speed make it potentially dangerous,” stated the department on their web site. “Most confrontations with bears are the result of a surprise encounter at close range.”

If you happen to see a bear in your neighborhood, contact the non-emergency dangerous animal hotline at 1-877-933-9847 or dial 911 in the event of an emergency. Those who encounter a bear are cautioned to remain calm, to not approach the animal and, in the event of an attack, to lay on your stomach and play dead and wait for the bear to leave.
Read more from:
TC - Police, Fire and EMS
Tags:
None
Share: