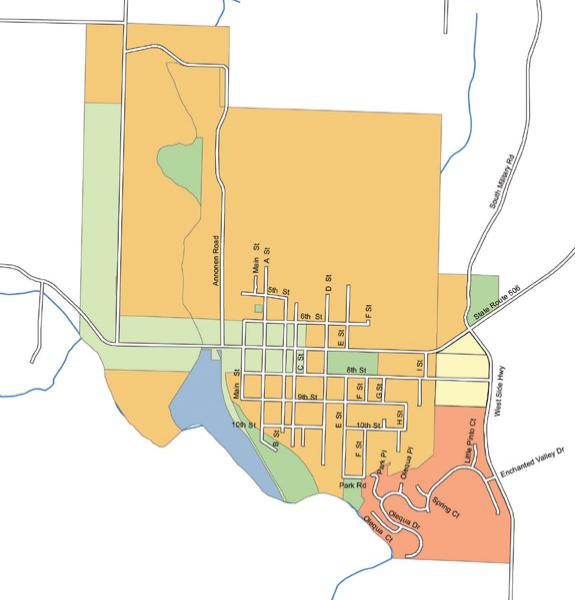 Vader’s industrial district, indicated in blue on the south side of the map, is the proposed location for recreational marijuana facilities within the town.

The Vader City Council has chosen to pursue an ordinance allowing recreational marijuana in industrial zones after being advised a moratorium would likely result in litigation.

It was decided unanimously Nov. 26 the council will prepare an ordinance adding recreational marijuana to the allowed uses of industrial property, with an intention of passing an interim ordinance during their next meeting Dec. 3.

Mayor Ken Smith clarified a change to the city’s zoning regulations would require a series of hearings, and a long-term ordinance is expected to be produced in the coming weeks.

Officials had at one time been considering a moratorium against recreational marijuana, as some council members and many residents felt marijuana would pose harm to both the reputation and well-being of Vader. But the city’s insurance provider, the Association of Washington Cities (AWC), has informed officials a moratorium would likely be interpreted as an attempt to ban recreational marijuana without actually banning it, and would not stand up to a lawsuit if the issue was taken to court.

When asked if such a ban would disallow even the use of medical marijuana, Smith replied it would, and said those who seek to grow it or use it would need to do so outside of the city limits. (Vader currently has no specific ordinance regulating medical marijuana.)

Both the medical marijuana ban and recreational marijuana zoning are expected to have been discussed during the council's Tuesday night meeting. For updates, go to www.hometowndebate.com.