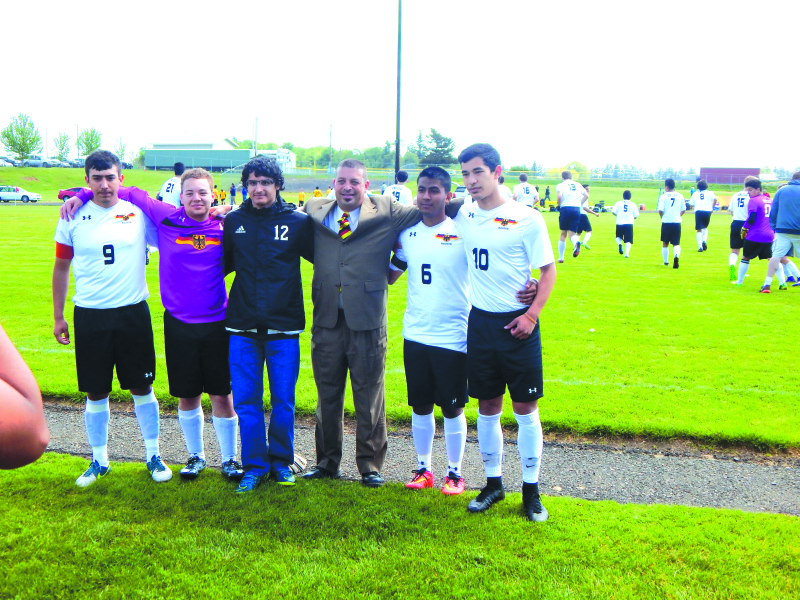 On Tuesday April 26 Adair Garibay recorded another hat trick and had one assist in a 7-0 league win over the Stevenson Bulldogs. Andreas Malunat and Gustavo Barragan each recorded a goal and an assist for United. Nolan Patching split halves in goal with Alan Contreras. Contreras played the second half in goal and converted a penalty kick in the 68th minute which was the final goal of the game.

United has struggled in the last four years to score in King's Way, but have not lost in Vancouver to the Knights. Last year a last minute goal from Nicholas Patching secured United the tough 1-0 win. This year it took United 63 minutes to find their first goal on Thursday April 28.

Adair Garibay scored on a pass from Johnathon Van Vleck to give United a lead after the 0-0 deadlock. Gustavo Barragan scored a second goal in the 74th minute to ensure a win. Miguel Del Campo was taken to the hospital after colliding with a King's Way attacker during the first five minutes of play.

United boys celebrated senior night before the game and honored their five seniors on Saturday April 30. Adair Garibay, Nolan Patching, Orlando Hurtado, Fernando Munoz, and Miguel Del Campo were the seniors honored. This Saturday was Senior Day and then Prom Night as Toledo and Winlock high schools both had their proms on this night.

Seton Catholic did as much as it could to hold United to minimal scoring, but the high-powered United squad scored six goals in a 6-2 win. United clinched a spot in the district playoffs after the win on Thursday, and now has to wait until Friday, May 6th to play their final league game in White Salmon.

Note: Adair Garibay is five goals away from scoring 100 goals throughout his high school career.