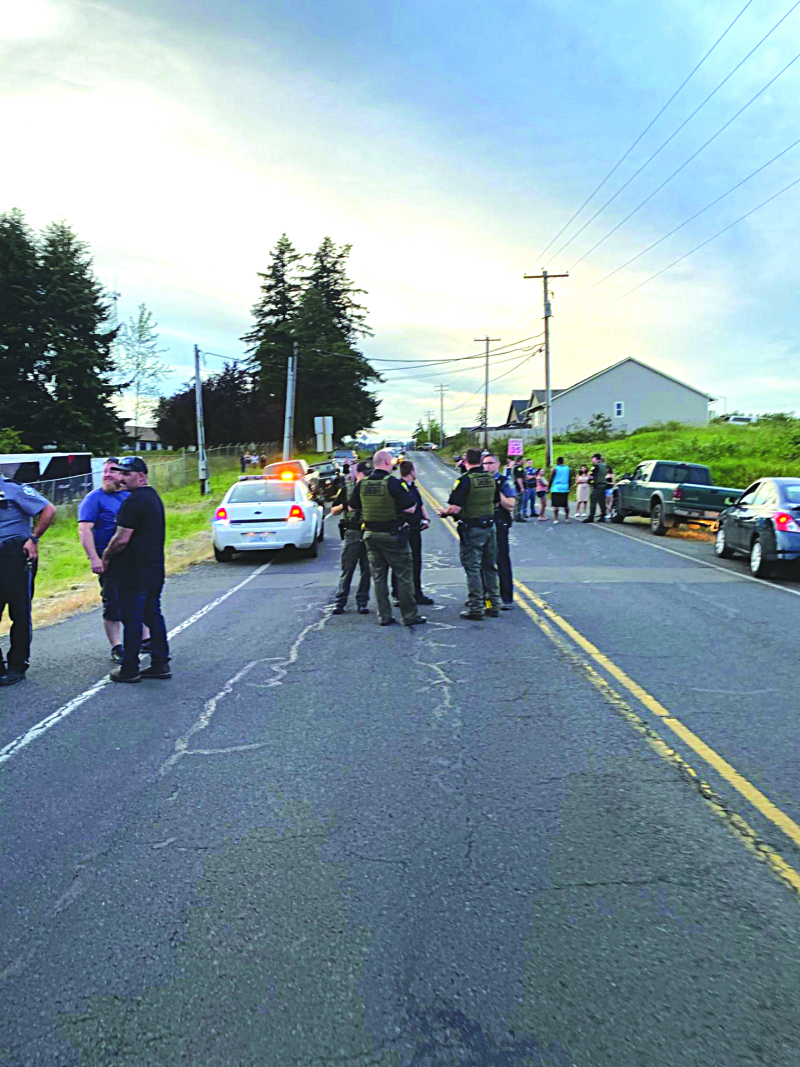 Napavine Police Department and Lewis County Sheriffs were called to the Uncle Sam sign when a protector was assaulted by a protester. The protester was arrested at the scene.

The City of Napavine received a show of support like never before over the Uncle Sam sign. The city had heard that the petition asking the owner to remove the sign was going to be delivered during the next open city council meeting, even though no one had called them directly.

By Monday, June 22, the rumors were to meet at Bethel Church in Napavine at 4:00 p.m. Tuesday, June 23. There were hundreds of people at Bethel Church. As you drove in there were American flags, and people near their vehicles talking to friends.

A little after 4:00 p.m., Sheriff Snaza addressed the crowd. "We do not know exactly how many people will show up", Sheriff Snaza stated. He went on to talk about a local person who had called and wanted to protest, but was afraid of the guns. Sheriff Snaza stated, "There is the first amendment and there is that thing called the second amendment. ... Everyone is not against peaceful protest, but we are tired of hearing about Seattle and Portland." The crowd erupted because the majority of Lewis County residents believe in their rights to bear arms and their rights to free speech. Sheriff Snaza went on to say, "I will not allow any violence or destruction to occur."

There were individuals from all over the county to support free speech. Representatives from Winlock, Napavine, PeEll, Toledo, Chehalis, Centralia, Adna, Onalaska, Morton, and Mossyrock were there. Others came from Cowlitz and Pacific Counties as well. The show of support was unbelievable.

After Sheriff Snaza addressed the crowd, they slowly moved out, some went to the Hamilton sign and others went to Napavine City Hall. At the Napavine City Council meeting only six people were allowed in the meeting at a time. The majority of those in attendance were Hamilton family members. The petitioner did not show.

During public comment Claire Hamilton stated "to get back to the sign, it's been to court three different times. The State of Washington took Al to court three different times and Al won every time." He went on to say "I have a barn down there, I can't see that someone comes along and doesn't like my barn, have a petition to take it down. I don't think it's quite fair. I was born in America and I believed in America." Those in attendance applauded.

Penny Hamilton Mauel stated "stand strong and stay with us. The sign does not say please agree with us, it says, please think."

Deborah Hamilton Graham stated "I have supported my family throughout their freedom of speech, I don't always agree either but it makes you think and that's the point...."

Marissa Jay from Buzzard and O'Rourke Law Firm who are the city attorneys for the City of Napavine stated, "The city is not saying they support the sign and everything on it, they are also not saying they don't support it. It's very clear the Constitution supports your freedom of speech.... There is nothing giving the city any reason to intervene."

After the city council meeting, the majority of the crowd went down to the Hamilton sign. There were several hundred people lining Rush road in their vehicles and in local businesses parking lots. There were flags, banners and several holding their firearms.

The show of support for the Hamilton sign was very impressive. To many in the crowd, it was about freedom of speech and private property. While many have questioned if the show of force was necessary, many felt it thwarted any attack on the sign or the city itself. Many had heard Antifa was coming down to cause destruction, including shutting down I-5 at Rush Road. This did not happen either, many believe nothing happened because the residents of Lewis County showed they will not stand for destruction and violence. If anyone doubted the passion of Lewis County residents for the Hamilton sign, Tuesday's crowd showed they will protect free speech with their 2nd amendment right to bear arms.

Lewis County residents heard the call to stand up for Freedom of Speech and the Right to Bear Arms. They stood strong.