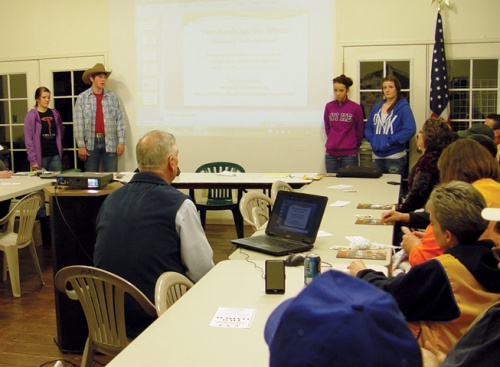 Toledo High School’s Two Hands on the Wheel program is vying for a grand prize of $15,000 after entering the Toyota Teen Driving Video Challenge last week.

While students have been working since December to educate others about the dangers of distracted driving, they submitted their entry to the contest Feb. 13 for a chance to win one of several cash prizes and access to a Discover Channel film crew to create a professional-grade video for driver safety.

Program organizer Martin Huffman, Toledo High School principal, created Two Hands on the Wheel after realizing the compromising driving situations he had placed himself—and others—in last summer while corresponding with a friend on the phone. He now leads more than a dozen students in creating slideshows and sharing personal experiences with community members, such as tenth-grader Colton Bunyard’s story.

Bunyard is open about how his brother was killed in a collision in Oklahoma by another driver, who had crossed the centerline while texting behind the wheel.

“It’s better to be a few minutes late,” said Bunyard of pulling to the shoulder for a phone call or text message, stating the alternative could be serious injury or death for yourself or someone else.

Students have presented to other Toledo students and parents of seniors in past months, but have recently taken their show on the road. They spoke with Winlock High School students Feb. 6 during a driver’s education class and the Toledo Lions Club Feb. 13 at the Morgan Arts Center.

“This is kind of a new idea for us,” said Huffman to Lions Club members that night, asking for open commentary and criticism so students may improve.

So far, the impression is anecdotes have been valuable and effective, but students should make sure all presenters get a chance to speak and share during the program. Huffman said students have been forced to refine their public speaking skills by participating and are making strong progress

He added the next stops for Two Hands on the Wheel will be Lacy High School and Centralia High School, with others to be booked at a later date. If Toledo were to win the Toyota Teen Driving Video Challenge, the funding could be used toward taking trips to even more locations as well as learning materials to be distributed during the presentation.

Contest judges will select the top ten entries and post them for viewers to vote on online, with winners to be announced in May. Those interested in full contest details can visit toyotateendriver.discoveryeducation.com.
Read more from:
TC - Community News
Tags:
None
Share: