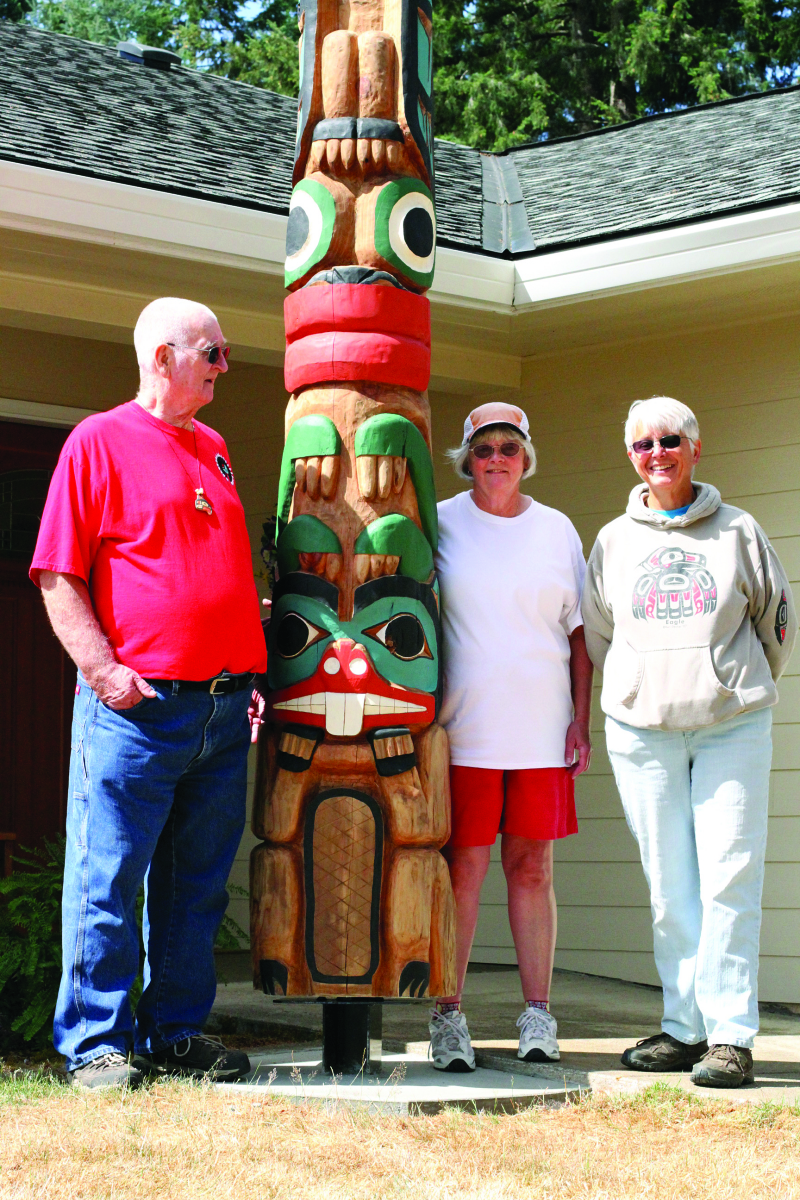 Photo by Patrick L. Myers Gathered around the Totem Pole, John Fielding, Liz Schroeder and Tam Hinck take a moment after the ceremony to admire their work of art, tradition and celebration of community.

Thursday July 16, Liz Schroeder erected her hand carved homemade totem pole, and Roy Wilson, Spiritual Leader of the Cowlitz Indian Tribe, made an appearance to bless it. Schroeder, and two other companions, Tam Hinck and John Fielding have been in the works with the totem pole for almost a year and a half. Schroeder had been interested to try woodcarving, and took the necessary steps and found the appropriate people to help her after she had been gifted a cedar log.

Honorary Chief and Spiritual Leader Wilson explained the significance of his ceremony, before he proceeded to sweep the entire area where the pole was to be erected with a cedar bow. "From the cedar tree comes everything," explained Wilson. "Housing, clothing, tools and food all come from the cedar tree, which makes this cedar bow 'powerful medicine.'" Wilson went on to explain the difference between Native American medicine and the medicine one might think to involve drugs and illness. He defined Native American medicine as anything that makes a change in someone's life.

After Wilson blessed the site, the pole was raised and a plaque was affixed to the back. The plaque was Schroeder's, and listed the carver's names and all the helpers as well as a poem telling of the animals that were carved on the pole.

"RAVEN of the air, I like and talk to ravens.

FROG of water, I have raised 100's of froglets.

BEAVER of land, I am "Ballard Beaver."

Chief Wilson continued the ceremony by smudging the pole with sage, explaining the significance of the sage that was burnt, and the Eagle feather that was used to fan the smoldering sage, as well as the shell that the burning sage sat in. Wilson explained that it was a sort of an "ode" to their creator, and a sort of cleansing with the smoke, and went on to say a prayer as the smoke billowed from the shell in his hand.

"Hello Chief of high above," said Wilson, "Good morning, we have gathered here to bless this totem pole." Wilson ended the prayer by saying "thank you from our hearts" in a Native American trading language that was universal among coastal Native Americans as well as anybody looking to trade with them.

The three woodcarvers took the next segment to congratulate each other and exchange gifts. Hand crafted wooden pens were given out by Hinck, while Schroeder made cookies and filled hand crafted woven baskets and gave them to her two colleagues, "I needed to thank Tam and John, the master carvers," Schroeder said. Schroeder continued to list the rest of the contributors, and explain how they all contributed to the totem pole and thanked them as well.

After all was said and done Schroeder hosted refreshments and Spiritual Leader Wilson ended the event with a riveting rally about how this event had been an excellent community gathering, and realizing that you are part of a community, or a bigger group of people is what gives us power. "The more we realize that we are community, the stronger we all become, together."