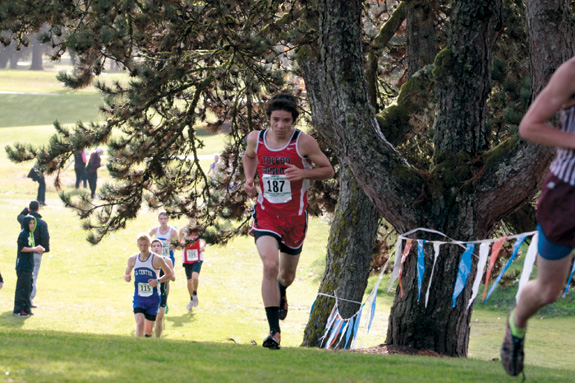 Toledo/Winlock’s Ashton Fraser powers up one of the few hills at the District IV Cross Country Championships at the Lewis River Golf Course in Woodland on Saturday.

The Toledo/Winlock Boys Cross Country team qualified for the WIAA State Cross Country Championships to be held next Saturday in Pasco with a third place finish in the District IV Championships held at the Lewis River Golf Course in Woodland on Saturday.

With only four teams to state from District IV, there was some drama.  La Center dominated the meet followed by Elma.  Strong competition from White Salmon, Rochester and Woodland made the results announcement tense.  Just 15 points separated the four teams.

Once again, T/W’s depth paid off.  The difference between third and fourth place in the team race may be traced to Toledo/Winlock’s fifth runner Jared Pohll who grabbed 45th place.  Pohll, a sophomore at Winlock High School and the only Cardinal member of the T/W team, passed four runners including the 5th and 6th White Salmon runners in the final 200 meters.  The strong finish earned T/W four fewer points and added one to three points to While Salmon’s final tally.  As it was, only five total points separated the third and fourth place teams.

“It was definitely a fast course,” said Fraser. “There were only one or two slow corners where there were hills.”

Toledo’s Sally Martin qualified for state as an individual for the second year.  She finished 13th in the race but Toledo only had three girls running which is not a full-team.

“We lost our top two runners last year to graduation, so getting back to state was going to be a big challenge,” said head coach Brian Layton.  “These guys made that challenge their goal and worked extremely hard.  They did everything we asked of them.  We, the coaches, are extremely proud of them,” continued Layton.

The Castle Rock boys finished 14th in the team race and 39th place finisher Jake Kimball was their top runner.

The Rocket girls also ran without a team and Jessie Mitchem was the highest CR finisher in 27th place.