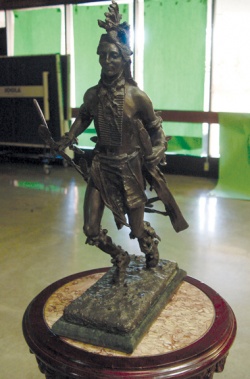 “The Warrior,” a bronze sculpture by Fredrick Remington on display at Toledo High School March 8 during a celebration of the basketball team’s championship victory at the state tournament.

To honor the recent achievements of Toledo High School’s boys basketball team, residents Keith and Judy Kammerzell have donated a Fredrick Remington sculpture to the school, for which they were thanked during the Toledo School Board meeting Thursday night.

Titled "The Warrior," the sculpture is of an Indian tribesman in full headdress "ready for war," stated Keith Kammerzell, who said the donation was made in response to the team’s WIAA 1A state championship victory in Yakima last month.

"The significance of the bronze that we gave them is retrospect to the achievement those young men did," he said, stating the bronze was also representative of Toledo’s Indian mascot. "We’ve enjoyed it in our home, but it’s not like sharing it."

Keith Kammerzell has himself competed in state basketball tournaments as a high-school student while living in Colfax in the 1950s. He has since served as a mentor for young athletes after moving to Toledo, and has been commonly seen with his wife taking pictures and video of sporting events.

"The future of this country is our youth," said Keith Kammerzell, stating it is incumbent upon the older generation to do what they can to inspire the younger. "I don’t think there’s anything better that we can do."

The statue was on public display March 10 during a celebration of the championship win at the Toledo High School Commons, but has since been kept in storage until administrators are able to find it a permanent home.

High School Principal Martin Huffman said they are actively evaluating locations within the school suitable for displaying the piece, which stands a little more than a foot tall, and will likely construct a new display case where the sculpture can be featured prominently and securely.

During the meeting, District Superintendent Sharon Bower told Keith Kammerzell they are very grateful for the sculpture, both due to its significance as a piece of Americana and the fact that it came from such an involved and dedicated member of the Toledo community.

"Your intent and story will be part of the legend that goes with the bronze, because the spirit of it is maybe even more important than the object," she said. "Thank you for being so generous and so supportive and believing in our kids."

Keith Kammerzell thanked officials for their expression of gratitude and said he hopes the sculpture, as well as the championship win, will inspire future generations of Toledo students to strive for greatness. 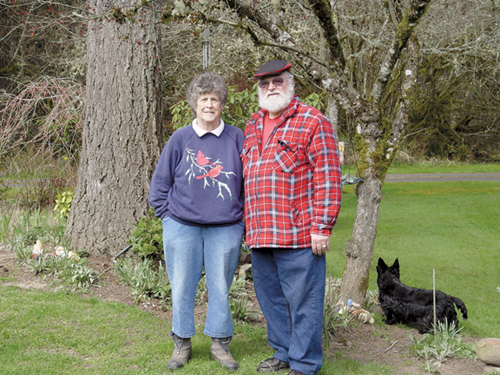 Judy Kammerzell (left) and Keith Kammerzell (right) at their home in Toledo. Their donation of a Fredrick Remington sculpture to Toledo High School was commended during the Toledo School Board meeting Thursday night.