Morey, who was 80 years old, had been found dead in his Toledo home April 11 of a heart attack and, in light of the community’s loss, city leaders issued a proclamation during the meeting honoring Morey’s contributions to the city.

"We had in our midst a great man and long-time community leader," read Mayor Jerry Pratt from the proclamation, which stated Morey "demonstrated great character in his life and in his work."

"He was a friend," added Pratt on a personal note.

Morey became Toledo’s police chief in 1984 after serving for short periods of time as a patrolman in Winlock and police chief in Mossyrock. He led the Toledo Police Department until he retired from law enforcement in 1996, after which he went on to serve on the Toledo City Council from 1997 to 2001, and again from 2007 to 2011.

Current Toledo Police Chief John Brockmueller, who began his career under Morey in 1986, said his former administrator remained dear to those currently serving in the department.

"I’m really sad to see him pass away," said Brockmueller. "It’s a big loss to us."

Officer Randy Pennington, who was able to serve with Morey all 12 years he led the department, said he still remembers the advice Morey gave him as a rookie.

"He told me not all people can be a police officer," said Pennington, "not all police officers can be a small town cop. It takes a special cop…He must have taught me well because I’ve been here for almost 26 years."

A memorial to honor Morey is expected to be scheduled for later this summer while his survivors, former wife Jackie Morey and daughters Sharie Andrews and Kathryn Stjernstrom, will be holding a funeral at their home in the Los Angeles area. Bert Morey was originally from California himself and Stjernstrom said he came to love living in Southwest Washington, refusing many offers to leave Toledo over the years.

"Washington was his home," she said, stating the residents and police officers her family has met in Toledo have been very supportive in the midst of their loss. 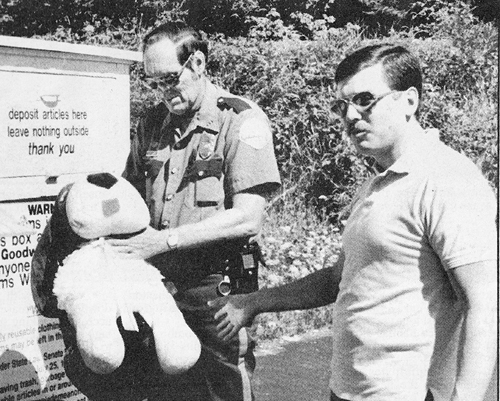 Toledo Police Chief Bert Morey (left) with then-mayor Grover Laseke (right) investigating the theft of Goodwill donations in August of 1988. Morey served as chief from 1984 to 1996 and was found dead of a heart attack April 11.