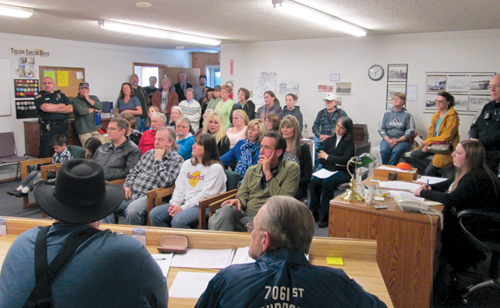 A Friends of the Library program seems to be the next step for volunteers hoping to bring a Timberland Library to Toledo.

Other libraries within the Timberland Library District have Friends groups, which act as fundraising entities helping to coordinate and promote library programs. They can also help generate support for the ballot measures necessary to join the library district, according to Jeff Kleingartner, communications manager for Timberland.

"A group that can discuss the issue and help people become aware would be helpful," said Kleingartner, adding the formation of a Friends group would also be a good example for Timberland officials of how enthused the community is for a library. "Getting together to show their support and enthusiasm for this would be important."

In order for Toledo to annex itself into the Timberland Library District, voters would have to approve a property tax increase of $0.415 for every $1,000 of assessed value, and Kleingartner said the district considers approval of annexation a major hurdle to overcome before other official steps can be taken.

"We don’t move very far ahead until the annexation vote," he said, stating Timberland wants to be certain their efforts to start a library will not be undone if annexation fails.

He added an official ordinance from the Toledo City Council supporting annexation is needed for the Library District Board to consider a library proposal, as well as to have annexation placed on the ballot. During their April 15 meeting, council members offered their unofficial support of a proposal brought by Bill and Pat Caldwell, who intend to donate their building on Cowlitz St. to the city for use as a library. The building had been a pharmacy until 2011 and housed Toledo’s Daily Grind until last month, and City Clerk Michelle Whitten said it is likely officials will be willing to approve an ordinance in the future, given their current support of the issue.

After an ordinance and annexation are passed, Kleingartner said Timberland will begin to evaluate community interest for a library; the benefit of having another facility relative to those available in the area; and the possible uses afforded by the buildings available. But he added, if Toledo does not vote on annexation until the general election this November, Timberland could not establish a library in Toledo until 2015, as the district’s 2014 budget has to be submitted to the state by August 1.

"If you wait until the general election, you’re not going to be in time for the property tax collection to begin in January," said Kleingartner, stating Toledo may still make it into the 2014 budget if they are able to pass annexation through a special election this summer, though the Secretary of State’s web site indicated the last available special election before August was Tuesday, April 23.

However, members of vision:Toledo are already taking steps to form a Friends of the Toledo Library program, as volunteers Mike Morgan and Jake Morgan attended a workshop in Chehalis Saturday to learn more about how such a group could become official.

The workshop was part of an annual meeting of Friends from all across the district and vision:Toledo had learned of it’s availability by way of the Friends of the Winlock Library. Mike Morgan said the workshop was "pretty straightforward" and largely discussed the legal steps needed to become an official non-profit, adding he believes a Friends group could operate under the 501c3 status currently obtained by vision:Toledo.

He added he ran into Lewis County Commissioner Edna Fund at the gathering, who used to serve on the Lewis County Board of Directors for Timberland, and told her about Toledo’s desire to start a library.

"She said she’d help us in any way she can," stated Mike Morgan, acknowledging Fund is not associated in an official capacity with Timberland at this time.

A meeting of vision:Toledo leaders Monday night discussed the concept of a Friends group as well as who may be willing to lead it, among other business. For these and other updates about efforts to form a Toledo Library, visit www.hometowndebate.com.