Toledo holds on to beat Adna in classic 2B matchup 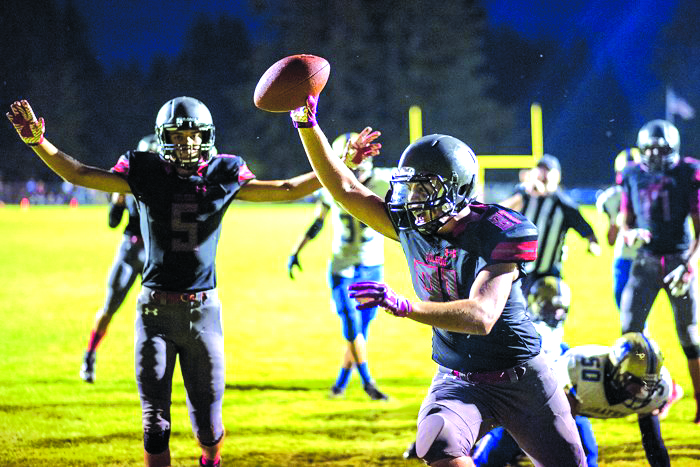 Dakota Robins celebrates after picking up an Adna fumble. Toledo won 35-34 in a battle of top ten teams.

One man once said, "Fool me one time, shame on you. Fool me twice, shame on me."

Adna coach KC Johnson may have felt some shame after attempting to go for two and the win for the second year in a row against Toledo and also failing for the second year in a row. This time it was an attempted fake field goal. The Adna holder rolled out and tried finding Derek Chilcoate in the back of the end zone. As the ball was going through the air, it looked as though Chilcoate would come up with it. Then, Gannon Madill came through and tipped the ball away, ending the Pirate attack and chance at winning the game. It was a climactic finish to one of the greatest 2B games anyone might have the opportunity to witness.

Early on in the game it was not as dramatic. Toledo opened up a 14-0 lead in the second quarter after a Keyton Wallace touchdown and a Yoder rushing touchdown. Adna could not find anything past the Toledo defense, but then finally the Pirates aired one out to Derek Chilcoate. A 41-yard touchdown pass from Weed to Chilcoate cut the Toledo lead back to seven, but good fortunes helped Toledo's chances going into halftime.

Toledo came knocking at the door. A long drive, and the Indians looked to extend their lead to 21-7 just before halftime. Then a pass play was called in the red zone, resulting in an interception at the one. Chilcoate picked it off, then fell back into the end zone. Rather than calling it a touchback, and taking it out to the 20 as would usually happen, the ball was spotted at the one. Great momentum for the Pirates! What could they do with it? Fumble on their first play. Dakota Robins pounced on the ball in the end zone for the Toledo touchdown and they led 21-7 at the half.

Most of Toledo's success so far came from stopping the Adna horsemen. Chilcoate, Ingle, and Rigdon did not have much of a game in the first half. Then, after limping off the field at the end of the first half, it seemed like something awoke inside of Adna back Issac Ingle.

The senior fullback went on to run for over 150 yards, with all three scores in the second half alone.

Adna scored twice in the third quarter, the second with nine seconds remaining, to tie the game at 21. Both scores came from Ingle, the first from 50 yards out and then another from 45 yards out. Ingle had his burners on all second half, and would not stop. He ran around, past, and through the Toledo defense.

With the fourth quarter coming, Toledo quarterback and leader Dalton Yoder came out seeming to do whatever he could to help his team win. He ran for a likely career high 109 yards.

The very first drive of the fourth quarter, Yoder used the power of his legs to bring the Indians into scoring range. Then, two plays into the red zone, Yoder powered his way into the end zone. Adna came right back in just a couple minutes, and tied the game again with another Weed-Chilcoate touchdown pass.

Once again, Yoder would carry the team. He ran for 67 yards on the next drive alone, on five carries. He was like a bull, and would not stop wreaking havoc on the Adna defenders until he was in the end zone. He went on to score again from two yards out making it 35-28 Toledo. With 3:46 left, Adna knew this was no problem for their explosive offense. The Pirates were driving, and then Toledo's defense showed their stuff with their backs in their own territory. At the 45-yard line, Toledo held Adna in check. Fourth and third came for the Pirates at the 38. Who else would they hand the ball to other than Issac Ingle? No one. A sweep to the right, and Ingle showed the monster power he had. He knocked two Toledo defenders over and carried more over the first-down marker and then he went on to score for the Pirates to bring his team within one.

In my head, and maybe no one else's, I was thinking "There is no way he would go for two again." Sure enough, Adna lined up for two. Johnson called a timeout, then afterwards, lined up for two again. Toledo calls their timeout. KC Johnson yells, "Get the tee!" Adna lines up for the field goal, but it's a fake.

Weed rolls out, lobs it to the end zone, and Gannon Madill knocks it away.

Adna's onside kick attempt was anti-climactic, and did not even reach a five-yard distance. Yoder, the man of the game, would hold on to the ball in the final knees. Who else is better deserving of this?

"K.C. is a heckuva coach and he's more of a gambler than I am so I knew he was going for two," said Thibault. "I don't think there was a loser here tonight except for maybe the ticket box. I think you should probably have to pay a little extra on the way out."

The Indians coach said there wasn't a whole lot of strategy that went into the second half attack; he just let Yoder do his thing.

"He said he wanted the ball and he's smarter than I am so we did it," said Thibault.

Yoder credited the sustained efforts of his offensive cohorts for his big game. "You can't run one against 11. ... These guys go 110 percent every time."

Toledo now will face Pe Ell-Willapa Valley in their final nonleague match of the season. PWV lost to Adna in week 1.

PWV seems to have lost a lot of their power this season. They do still have Kaelin Jurek, who is arguably one of the best running backs in the 2B ranks.

PWV lost to Adna 28-6 in week 1 in Adna's first showing as a true power this season. PWV will continue to rely on Jurek, but look for Toledo's D-line to put a hold on him on Friday night in Menlo.