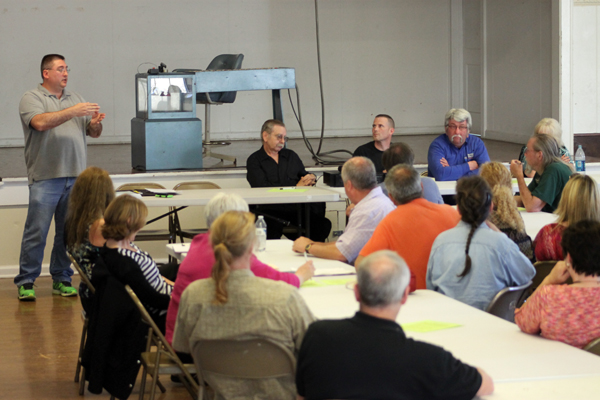 Winlock Mayor Lonnie Dowell (far left) addresses the public during a forum held May 20 at the Community Building to gather input regarding the city's options for law enforcement coverage after Police Chief Terry Williams retires June 30.

A public forum regarding the future of law enforcement in Winlock centered largely around a proposal for contracted services from Toledo, as Winlock prepares for the retirement of Police Chief Terry Williams on June 30.

Held May 20 at the Winlock Community Building, the forum had been organized by city leaders to gauge the interest of residents in either maintaining a Winlock Police Department or pursuing alternatives, such as contracting for the services of a chief and hiring a patrolman or contracting for all police services.

During the forum, Winlock Mayor Lonnie Dowell explained, according to a preliminary proposal from Toledo, Winlock may be able to increase the time an officer is actively on patrol from 10 hours per day to 20 hours per day, as a contract with Winlock would allow Toledo to hire a staff of four officers rather than the current two patrolling Winlock.

"There would be a presence in both cities," stated Dowell, clarifying Toledo would not simply increase their force and respond in Winlock as needed, but would actively patrol both towns. "It wouldn't be an 'us' and a 'them.' It would be one area."

Toledo Mayor Jerry Pratt, who was also at the meeting, adding he would expect officers to patrol Winlock more than Toledo, given the former city's population is almost double the latter's, and said he also intends to have emphasis patrols during the first part of the two cities' relationship to account for present drug and crime concerns in the area, if a contract for police coverage were approved.

"We're not doing this for Toledo," said Pratt of his city's intentions in offering the proposal, stating he is more interested in helping a neighboring town than attempting to bolster police coverage. "We're in great shape. We want to help out our community."

As of the most current proposal, Toledo is willing to offer full patrol and response coverage to Winlock for a beginning fee $196,000 per year, compared to the $250,417 Winlock plans to spend on its police department this year. Both Dowell and Pratt emphasized the current proposal is only a draft and intended as a framework for discussions, and has not even been examined by their cities attorneys yet.

They also acknowledged the contract, as it is proposed, would not cover all costs related to law enforcement, and Winlock would continue to pay for municipal court, city insurance, dispatch fees and other non-transferable costs. After the meeting, City Clerk Theda Curry reported Winlock would continue to incur roughly $53,200 in expenses if they contracted with Toledo, though such figures were not immediately available at the forum.

In anticipation of having to continue paying for certain costs, officials told those at the forum they still felt, if contracting with Toledo would cost the same as Winlock's current department, the agreement would still allow for 10 hours more per day of patrol coverage and would be a net benefit.

"We are trying to get more boots on the ground for the same money or less," said Council Member Aaron Mummert.

When entertaining comments from the public, a number of residents said they were concerned about having a department from another city patrolling Winlock, stating they felt there would likely be a disconnect with local residents. Dowell pointed out Toledo's two full-time officers and one active reserve all live in Winlock and are part of the community, adding a new chief of police would likely come from out of the area and would not begin with a strong connection to the city.

Other residents said they were concerned Winlock was not presenting enough details for citizens to appropriately respond to the different options before the city, as the draft from Toledo remains unofficial and specific cost comparisons were not available that evening.

"I just think that asking us to bless whichever way you choose to go is a little premature," stated resident Jennifer Fujimori, who said she was not opposed to an alternative, but would like to see "all the facts and figures."

Dowell said he was actively pursuing harder details and noted his office has only had since March 31, the date of Williams' official retirement notification, to begin exploring options.

"I'll definitely get numbers so people can get them," he said, stating any new information received by his office will be available through City Hall, as are current copies of Toledo's proposed contract and the 2015 police budget.

But one issue that may not be addressed through spreadsheets or policy discussions was what the loss of the Winlock Police Department would mean for the community, both related to its morale and sense of individuality.

"I think [if we lose the police department] we will lose our identity and, in the police world, that is something special," said resident and Civil Service Commissioner Dennis Korpi, who himself served as a police reserve in Winlock for 13 years.

Korpi said, though he is not opposed to the discussions taking place among city officials and even "applauds" their efforts to find such a solution for law enforcement, he feels any decision short of hiring a new chief would inevitably take away an important aspect of the city.

Dowell said the intent is not to absorb Winlock's police services into another agency but rather to pursue creating an entity that would be shared with Winlock, again pointing out the officers working for Toledo are a part of the Winlock community.

Dowell also noted Winlock is not yet dedicated to a contract with Toledo and said they were simply the only entity, out of the Lewis County Sheriff's Office and the City of Napavine, to respond with a specific proposal at the time. He added Winlock is continuing to pursue other strategies and has been accepting applications for a chief of police and a patrolman to keep the city's options open, depending on how the city council decides to proceed.

"We are trying to go in all directions, cover all bases at the same time, and not just work one thing only," he said. "We are working everything."

Dowell said the city intends to have chosen a specific course of action by July 1, the day after Williams' last day, and a workshop to continue discussing the issue has been scheduled for this Wednesday at 5 p.m. in City hall prior the next meeting of the Winlock City Council.