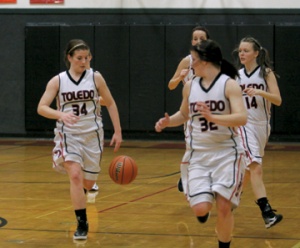 Despite a 66-44 Trico League loss to Kalama Dec. 21, Toledo girls Head Basketball Coach J.B. Ewers was not in a particularly bad mood.

"Our offense is improving," said Ewers. "That was the best second half of offense in a couple of years."

It was Casee and Chaselin Rice who formed a double-headed scoring monster for the Lady Indians as they combined for 35 points. To confuse matters even more, both of the Rice girls corralled 10 rebounds. Much of Casee’s scoring occurred after she was saddled with her 4th foul late in the second quarter.

Kalama jumped to a 19-7 lead early as Toledo faltered against an intense press.

"They seemed to panic against that pressure," explained Ewers. "Kalama executed that 1-3-1 trap very well."

The Indians would not go away. Twice they fought back to within 10 points and it looked like a little momentum might be headed their way but Kalama would reassert themselves.

"Every time we would get within 10, they had an answer," said Ewers who, despite the loss, was staying positive. "We shot 34% from the field and hit four 3-pointers. Our defense took a step back though and we have to out work teams to be successful. We are going through sort of a rough part of the schedule now, (Ilwaco, Kalama, Castle Rock plus a non-conference game against always tough Toutle Lake on December 27th) but we are making improvements."

Toledo is now 3-6 on the year and in sixth place in the Trico at 3-5.Ewers will be happy when his team puts together a complete game.