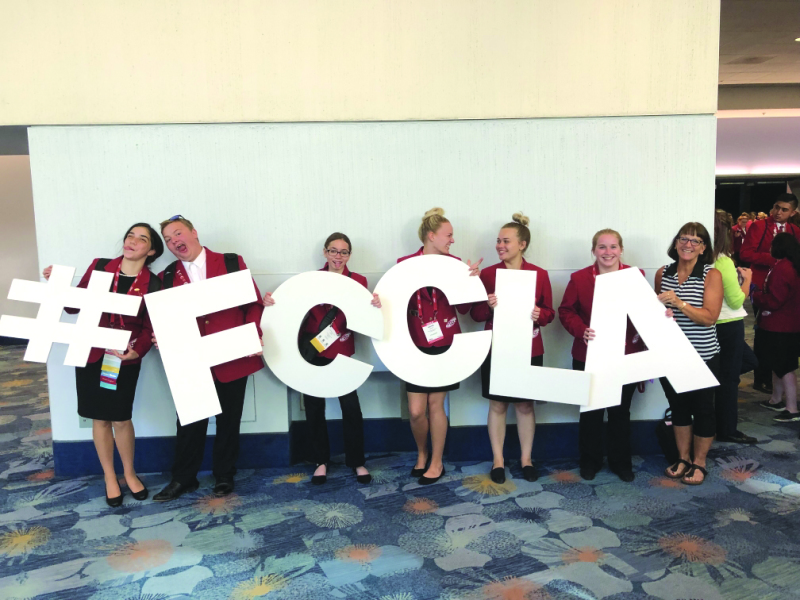 Skye Nyberg and Sydney McClure received gold medals for Live Event Planning. Emma Cline received silver for Chapter and Review. Carol Boyles received bronze in Digital Stories for Change FCCLA had a regional meeting in October, the students' projects began in September. Competition for regionals took place in January, and state was in March. The top two projects in state go to nationals.

Carol Boyles had an online event, and she was one of the top 15 that got to go. Boyles managed to work on a senior-level project in her freshman year in order to achieve this.

Calvin Wallace and Katie Bowen both attended Leadership Academy, and are co-presidents of the Toledo FCCLA chapter this year.

With only a few national consultants in the nation, Rene Ketchum, FCCLA advisor, was chosen to be one of them. "It was an honor to be picked, but it's going to be a lot of work," Ketchum commented.

The Region Meeting at Toledo First Baptist Church is on October 24. Emma Cline will be presiding over that meeting, as she is state Vice President of Region 2.

The Nation's theme for FCCLA this year is: Your Story, Our Story. This year's Toledo FCCLA theme is going to be: I Am, You Are, We Are, Hooked on FCCLA. They combined the national theme with the Lewis County area because the theme has to do with the Cowlitz River Hooked being a reference to fishing. Toledo plans on getting t-shirts in black, with a triangle pictured with a fishing hook in the middle.

Part of the fun in Anaheim was a 5k Twilight Fun Run, in which Katie, Calvin, and Mrs. Ketchum participated in. The money went toward a certain charity, which changes every year. Ketchum commented that it was a lot of fun.