The moonshine and vodka from Cowlitz River Distiller has fared well on the awards circuit.

A fledgling distillery in the Toledo area has been taking home multiple awards at recent national liquor competitions, while distribution of their product continues expanding.

Cowltiz River Distillery, owned by husband and wife duo Chad and Cindy Robins, has received six national awards since they began selling their moonshine and vodka last year, with additional accolades expected in the near future.

Their recognition began last year while attending a conference of the American Distillers Institute (ADI) in Seattle where, on something of a whim, they decided to enter their moonshine in the competition, and took home a bronze medal. This year, their vodka and moonshine each received silver medals at the Denver International Spirits Competition, and bronze medals at the San Francisco World Spirits Competition, while their vodka also received a gold medal from ADI and their moonshine was rated 88 out 100 at the United Spirits Challenge in New York.

"It's nice, because it just goes to show that we're making a product that's higher quality," said Cindy Robins of the awards.

Both Robins' explained they began the practice of distilling in 2011 in an effort to create spirits of the character and quality they would like to drink themselves, and began distributing their product to local stores and bars in January of 2014. Their efforts to produce unique spirits has led them to such ventures as building their own malt house, in which they are able to malt their corn prior to fermentation--a practice unheard of throughout most of the distilling industry--rather than breaking the corn down through chemical treatments or boiling.

And it was just last week when they heard they have been picked up for distribution by Total Wine & More, a nation-wide retailer of wine and spirits, with their stores between Seattle and Vancouver to begin carrying Cowlitz River Distillery products.

"That was a big one," said Cindy Robins of the deal with Total Wine & More, stating Cowlitz River Distillery is also entertaining tentative agreements for distribution by other large-scale retailers.

With such growth on the horizon, the Robins' said they are planning to expand their distillery before long, noting they could not have made it as far as they have without the support of family and friends, who have volunteered a great deal of labor and recourses.

And in addition to grater production space, Chad Robins said it is also their intention to add a new aged whiskey to their liquor offerings later this year, stating he hopes his product will begin converting fans from more traditional whiskeys.

"We're working forward," he said. "Everything is moving at a decent pace."

For more information about Cowlitz River Distillery, visit their website at www.cowlitzriverdistillery.com. 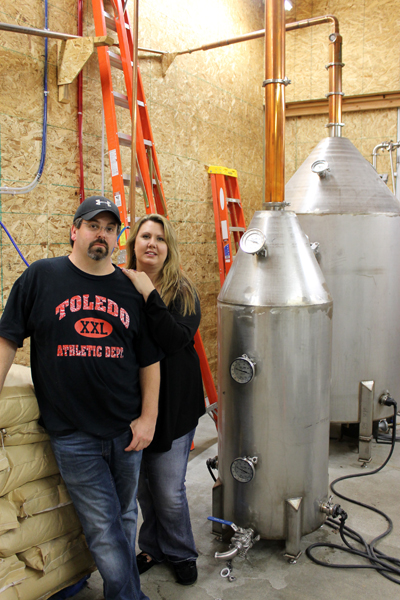 Chad Robins (left) and Cindy Robins (right) at their distillery just outside of Toledo.