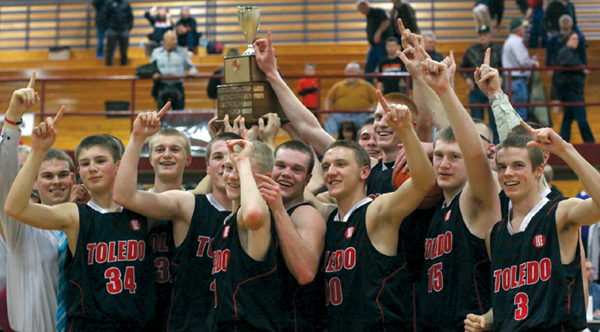 The Toledo boys basketball team celebrates with the 1A District IV trophy after defeating Kalama 60-49 in the championship game. Toledo is now onto the regional round of the WIAA State Tournament and will compete at W.F. West High School Saturday.

Toledo's 60-49 victory over Kalama for the District IV1A Championship Friday was straight off the clipboard of Head Coach Scott Merzioan. Start fast and keep the pressure on.

It was with that recipe the Indians took home their first District Title since 2007 despite tremendous success during through the last six years.

The Indians jumped to a 16-6 first quarter lead and never looked back, only allowing the Chinooks a couple of brief breaths during the third quarter. 6’7”, agile big man, Brennan Rakoz led the way in scoring for Toledo with 21 points.

"We all played well together," said Rakoz. "They had some great defense and I was coming off of screens and they kept switching so I was going to have a mismatch every time."

Scoring counter-part Austin Trafelet appeared to have a quiet night with 15 points, but the pair usually share dominance during an Indian basketball game.

"Austin kept driving and finding the open man every time,” continued Rakoz. “I thought that he had a great game. Everybody had a great game tonight. I was so proud of my team.”

“When I started to attack the lane, they started to collapse," said Trafelet. “There were people open on the perimeter or under the hoop.”

With all of the attention on Rakoz and Trafelet, Blake Wood came in off of the bench and went relatively unnoticed by the Chinook defense. In several offensive sets, multiple passes typically found  him standing alone under the bucket for several point-blank lay-ins. Wood finished the game with an important 10 points in the contest

“All week long, I was telling our guys, there is no more pressure," said Toledo Head Coach Scott Merzioan. "There was some pressure against Woodland [in the semi-finals]. We had beaten them twice and we were league champions so we were expected to be in the championship game. My whole goal and focus was to pump them up and let them know that there was no pressure. Kalama is good, we are good and we are in the spot everyone expected us to be. There are no repercussions if you lose"

Two three pointers after halftime, the Tribe took a 25-15 lead to 31-18 before Kalama went on a run and pulled within four points. The Indians held course with defense, patient offensive sets and good free throw shooting down the stretch for the final tally.

Toledo is now 22-1 and will face Mount Baker in the WIAA State Regionals at W.F. West High School on Saturday at 6 p.m.
Read more from:
TC - Sports
Tags:
None
Share: