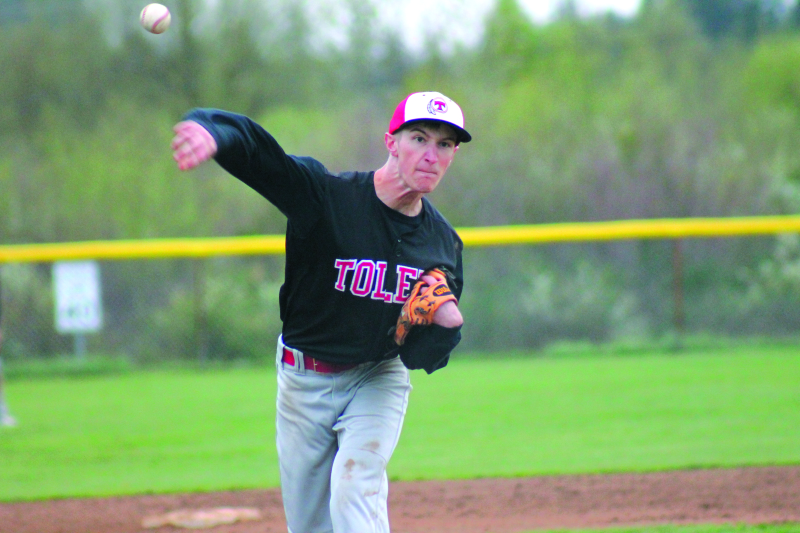 Photo by Nolan Patching - Toledo's pitching ace Wes Kuzminsky delivers a pitch in the fourth inning against Winlock. Kuzminsky allowed two runs on three hits and struck out seven, paving the way to an Indian win.

Toledo baseball continued their streak of league dominance with convincing 14-1, 12-4 wins over the Winlock Cardinals. The Indians scored 11 of their runs in the fourth and fifth innings, five in the fourth and six in the fifth, to end the game early in the fifth inning. The Indians also held Winlock to just one hit, a single by Brady Steveson in the first inning. Steveson was also Winlock's lone scorer in game one. Jackson Kuzminsky started on the mound for the Indians and pitched the entire game, only allowing the one hit and run and striking out five. Jake Anderson started for the Cardinals and pitched well for the first three innings, according to coach Scott Weinert. Connor Vermilyea led the Indians in game one going 3-4 from the plate. Jackson Kuzminsky, Wes Kuzminsky, and Dakota Robins each picked up two hits in the game.

In the second game of the doubleheader, Toledo got an out on pitcher Zach Weinert early, forcing an early pitching change after two innings. The Indians scored five runs in the first and four runs in the second innings. Wyatt Dean came in to relieve Weinert and pitched a solid game, giving up three runs and striking out a few. The Cardinals scraped across two runs in the fourth and fifth innings to keep this second game from ending early, but the game was called due to darkness in the bottom of the seventh inning. Connor Vermilyea went 3 for 4 with a double, three runs scored and two RBIs. Wes Kuzminsky went 2-4 with two runs and four RBIs. Wes Kuzminsky also had a solid outing on the mound, giving up two runs on three hits and striking out seven Cardinals. Toledo improves to 11-1, 10-0 in league, and is now in sole possession of first place after Pe Ell-Willapa Valley split two game with Toutle Lake.

Toledo softball took both games from Winlock by scores of 14-0 and 15-1. This key sweep may secure the entry of Toledo into the district playoffs, unless Winlock takes a few games from their next