They Came, They Played 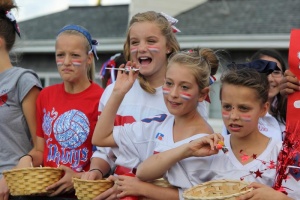 The 2014 Labor Day was full of events, games, displays and general good cheer during the four days of scheduled entertainment. As the days had many vendors and general gathering, the nights were filled with music and a fireworks show. Each day people making through town were treated to music in the street, oysters raw or cooked, a softball tournament, kids games and a general good time.

Scheduled events ran from Friday August 28 through the official Labor Day, September 1. And some lucky people, who wore their Labor Day pin, were found and given prizes.

The heart of the weekend was Saturday and Sunday with the Kiwanis Run, Kiddie Parade and Oyster contests.

A gathering of people crowded tables set up to serve as work tables for would be oyster shuckers. With the preliminary rounds going quickly, it got down to the final where four quick and furious oyster shuckers brought their skills to see who would be crowned champion this year. As the shuckers went off to select their 26 fresh oysters to open and scrap into a bowl, the judges prepared the oyster arena for the showdown. The key was to see how quickly one could open and then scrape the raw oyster into a bowl, competitors needed 24 but had a couple extra if one proved to be obstinate.

Guadulepe Leon, who had just finished his preliminary round to enter the final, stuck again with a time of 1 minute 12 seconds to take home the prize. Next in line this year was Algendro Leon at 1.18, third was Alberto Diaz, 1.30 and fourth Jose Leon at 1.32. Prizes were awarded for first through third.

The contest moved right into the raw oyster-eating contest. Contestants in this challenge had to eat 30 raw oysters as quickly as possible. Some seasoned veterans showed up like Washington State Representative and current Oyster Eating Champion Brian Blake, who was up to the challenge to keep the title.

"I have just come from a beach clean up, but I think I am ready to take the title again," said Blake.

Blake was surrounded by five other contenders, each seeking glory for their first time. Each person filled their small plastic cups with five oysters each and stood with arms up before the start. It only took Blake 13 seconds to finish his, a shade off his last year's time.

"I was a little off, one of the oysters got stuck in the cup."

Right behind Blake was Felipe Silva at 16 seconds and third was Martha Jones at 24 seconds.

For the 52nd Labor Day Celebration moved into Sunday, the streets were quickly taken over by lawn chairs, people opening up their doors and getting comfortable in their yards as the Labor Day Grand Parade was about to start.

"I would say that a conservative estimate of people would be between 2,500-3,000 here to watch the parade this year," said South Bend Police Chief Dave Eastham.

The lines stretched past were the eye could see, and traffic was diverted for the duration of the parade straight down the 101.

"It has been a good celebration so far," said Pacific County Sheriff Scott Johnson, "incidents have been low, but you expect some during a celebration like this,"

But the community was all in it for the fun, and were ready for the parade to begin. Without a hitch the American Legion lead the way and started the parade with the crowd joining Virginia Basil in singing the Start Spangled Banner. Basil and Pacific Court Judge Mike Sullivan announced as each float, car or marching band crossed the stage. Doug Hamilton of Raymond was on hand as he has been for the past 20 years, providing the sound system to ensure the assembled crowd could clearly hear the name of each parade participant.

The Mayor's Trophy, given for the best with the theme, went to Olsen's Timberland Ranch who brought in an antique 1931 Model A. The Sweepstakes award was presented to Goose Point Oysters and their float, sprinkling confetti along with candy into the crowd. Special Awards were also bestowed on Timberland Library, Willapa Harbor Hospital, South Bend Cheer, and Willapa Family Medicine.

South Bend brought their marching band, as well as athletes getting ready for the new season. There were cheerleaders from all area schools, and the South Bend City Council made an appearance aboard a the vintage 1924 German Bernstein fire truck, once used in South Bend. Many local clubs and groups made their entry into the parade from HAVA to the Chinook Indian Nation to Pacific County Transit and the Astoria Clowns.

As the parade made its way down the road, people quickly joined back into the activities and many caught the final of the softball tournament or the fireman's waterball competition. The day ended with a grand firework display.

Monday was a more leisurely celebration with the annual duck race in the early afternoon.