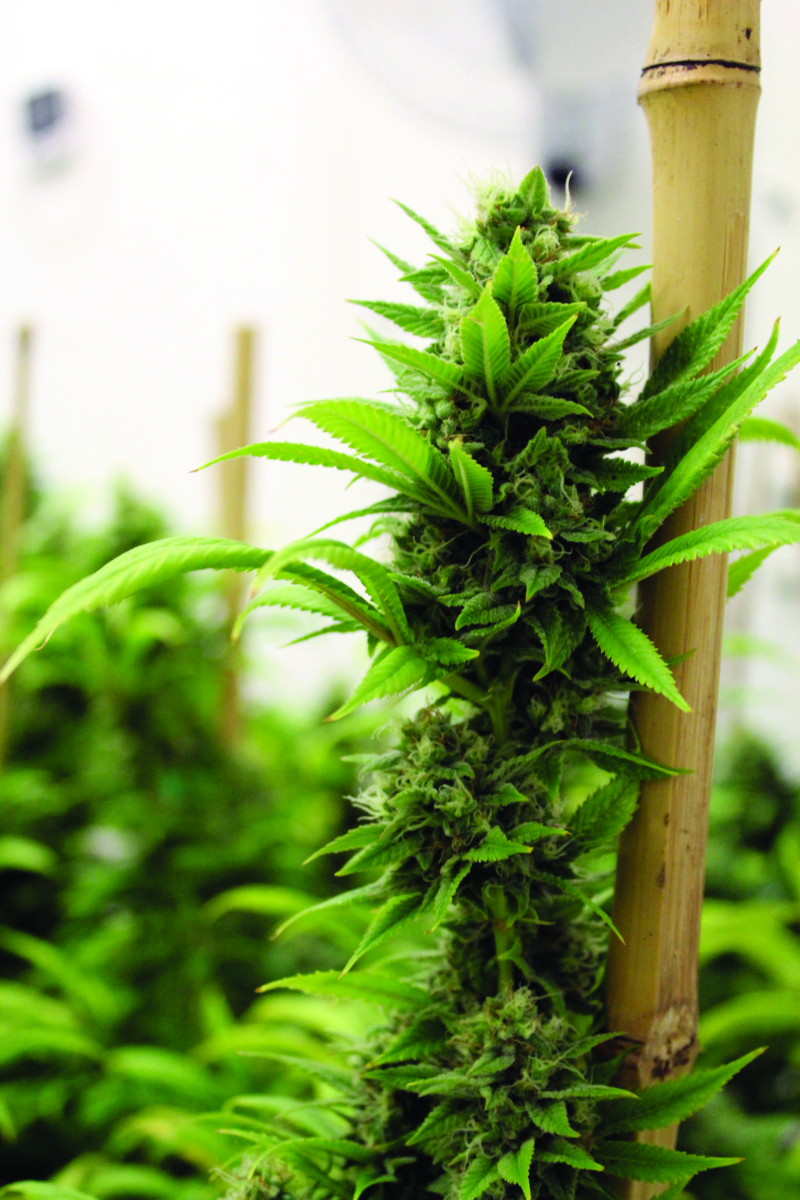 Production at THC in Raymond is ramping up and the producer is looking to bring a higher quality to the market.

A year into the Washington State Marijuana industry we still see more producers entering the market for the first time. One of the newest arrivals is THC or Two Heads Company based in Raymond.

Settled into one of the Port of Willapa Harbor properties, THC caught a lucky break gaining access to the quickly filled facility after a medical marijuana producer had to move out.

THC, a Tier I recreational marijuana producer/processor, is working on their allocated 2,000-square foot operation and have just delivered their first crop to market.

"We were able to move into the port in January of this year and one month later we got our license," said Joe and Brandy Heinrich of THC.

THC knows that they will not be able to compete with some of the larger Tier II and Tier III producers, and is banking on their expertise gained from the medical marijuana industry to provide a higher quality product taking a Craft Marijuana approach.

Once working on the railroad, Joe believes in his new business venture and is supported 100% by his wife Brandy.

"We thought it would be a lucrative industry and we had a chance to get into it as it is starting," he said.

Able to secure a location after the Port of Willapa Harbor had already filled up with marijuana operations, the couple consider themselves lucky to have found a spot that looks to be right in the middle of the latest industry to take root in Washington.

"It was not easy finding a location. And we were drawn to the friendliness of Pacific County and Raymond in general for this (cannabis) industry... it was very difficult for us to find a place a building to rent," said Joe.

THC has ready-to-ship several strains of Hybrid, Sativa and Indica flower and is getting their processing on-line.

"We have only just started getting our product out, but we have a few that have not been in the local market."

THC is trying to show the marijuana community a little of what they can produce. And with their "formula" for success, they hope it will keep the customers asking for more.

Local marijuana retailer Growers Outlet has already received orders from THC and has been running out of the product delivered as pre-rolls and 1-gram packets. One of the strains, AK-48, a hybrid, is starting to bring customers back asking for more.

"I can not seem to keep the stuff on the shelves. Customers are really enjoying the product from THC and it is hard to beat a $5 pre-roll," said Andrew Tessier of Growers Outlet.

Growers Outlet also has other hybrid offerings from THC, like Black Jack, and Grape God. THC has also delivered an indica, Holy Grail Kush and a sativa, Island Sweet Skunk.

Mr. Doobees in Raymond has looked at the product but is still in the process of deciding if they will be making an order from the local producer.

"We are ordering the Island Sweet Skunk, a Kush and some Grape God to see how our customers like the THC product," said Cannabis 21. "The kush will be a .5 gram pre-roll."

THC also has a couple of Northern Lights strains that people have been asking for, as well as a few strains that the consumer market has yet to be offered in the local area.

"We are also working on a couple of high CBD strains that will be ready soon," said Joe.

THC has been utilizing Integrity Labs out of Olympia and has yet to have any product fail the rigorous testing under state control.

"One thing that I will say is that we place the actual THC percentage on our product, not the total cannabinoids, but the Delta-9 tetrahydrocannabinol," said Joe, "I have seen some products that list a total number."

With their focus on quality and knowledge gained from the medical industry, THC may be one of the producers to watch in the very near future. And if they are true to their word and continue working on improving their quality working to a true "Craft" production, THC will be able to carve out their niche in the fastest growing industry in the state.

"We know that we are just getting started in the industry, but it is our belief that with the product that we will be able to bring to the market and our customer service, people will see what a craft producer can bring to the table."