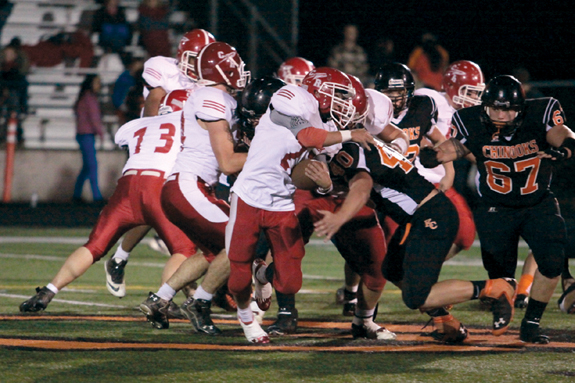 Castle Rock's Nate Williamson brought the lunch pail to the Rocket's 35-0 defeat by Kalama on Friday night. Williamson finished the game with 93 yards of rushing.

All those following via text and Twitter around Western Washington on Friday night were excited when the Cardinals took a 12-0 lead over Adna into the halftime locker room.

The Pirates came out and scored 22 straight points and held Winlock scoreless for the rest of the game. Chance Fisher ran for the first TD and accumulated 115 yards carrying the ball. Evan Mitchell added the second TD for the Cards with a 28-yard run while Jonathon Whitney caught two passes for 31 yards of offense.

Winlock is now 0-5 overall and 0-4 in the 2B Central League and will travel to Pe Ell this Friday.

Big plays put the Rockets on their heels before Kalama took care of business in an important Trico League game.

A 79-yard interception for a score, a fumble that gave Kalama a short-field and then a 67-yard punt return made the game an uphill battle within minutes of the opening kick.

In the meantime, the Rocket offense was productive, but couldn't finish. Nate Williamson rushed 20 times for 93 yards in a more than admirable performance.

Toledo was the latest Trico League team with the honor of playing the 3rd-ranked Woodland Beavers and also found them to be a more than apt opponent.

Kreed Askin had a solid night at running back with a TD and 114 of Toledo's 160 yards of rushing.

Toledo will host Kalama this week during their Homecoming game. The Indians, Kalama and White Salmon are all tied for third place in the Trico League. With Woodland and La Center in firm control of the lead, only two more playoff spots are available.

The Castle Rock and Toledo/Winlock soccer teams did what they must in order to compete for playoff spots in the Trico League.

With a 1-0 victory over Kalama on Thursday night, Castle Rock continues their run for the post season. Erica Nordmark scored the Rocket's only goal of the week while tender Megan Milward manufactured another shut-out to push the Rockets to a 5-4 record. The Lady Rockets will host La Center on Tuesday evening.

Toledo/Winlock added three wins including a 3-0 victory over the aforementioned Lady Chinooks on Tuesday. Hannah Ethridge scored two goals while Stephanie Yoder added another to her historical total. On Thursday, it was Courtney Moore that found the back of the net for a 1-0 defeat of La Center. United added one more win on Saturday with a 1-0 defeat of second place White Salmon. T/W goalkeeper Cecila Stalcup has shut out three consecutive opponents during the current winning streak.

Toledo-Winlock now has a record of 6-5 in the Trico League. United will host Stevenson on Tuesday and then go on the rod for two games including one against league-leading Woodland on Thursday.

It was T/W's first loss of the season, but the Wildcats are also one of the favorites to win state in Cross Country this year. Toledo's Austin Fraser placed 7th of 86 runners in the varsity race. Behind Fraser, United scorers included Forrest Wallace in 9th, Jackson Kuzminsky in 14th, Jared Pohll, 16th and Isaiah Johnson finished in 18th place. Toledo's Sally Martin finished 7th in the girls race that featured 48 runners.