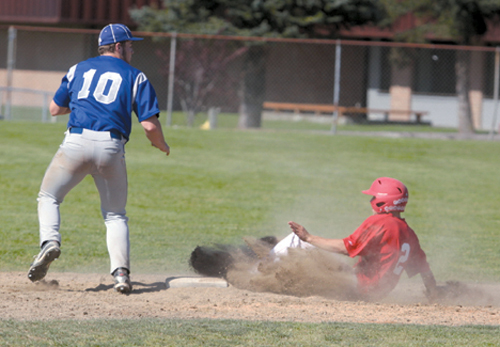 Castle Rock's Nate Williamson slides into second base against La Center during Tuesday's second round District IV playoff game. Williamson had two hits and five RBIs during the game.

Castle Rock Baseball Season Ends
Previously-undefeated Montesano ended Castle Rock's baseball season Friday in the District IV 1A Tournament with a 13-1 thumping of the Trico League Champions. In the first round of the tournament held on Tuesday, surprising Tenino took a first round victory from the Rockets.

CR arrived via a 12-8 victory over La Center in a loser-out game. Nate Williamson went 2 for 3 with two doubles in the game. He had two doubles and five RBIs. Andy Voelker, Austin Elf, Mason Klingberg, T.J Catlin and Cole Beckers had two hits apiece.

"It is all good," said Castle Rock’s Joe Bair. "We got a lead, Nate (Williamson) established us early. We had guys piece it together pitching-wise."

"We needed somebody to settle it down and Cole came it and settled it down," added a pleased Bair.

The Rockets jumped out to a big lead but late in the game La Center pulled to within 12-8 but could never get any closer due to the pitching of Cole Beckers who held the Wildcats scoreless in the final two frames.

Castle Rock finished their season with a 12-10 record but won the Trico League title.

The girls were powered by strong performances by Elizabeth Moore who won the 200 and 400 meters while Laura Patrick won the 100 meters.

The CR 4 X 200 and 4 X 400 meter relay team of Laura Patrick, Amy Patrick, Nikki Holliday, and Mikayla Risner placed 2nd in the league qualifying them for this week's 1A District IV Track meet in both events.

On the boys side, senior Austin Moor won the 100, 200 and 400 meters to advance on to the district track meet which will be held at Rainier High School this Friday.

Toledo's Navolynski Advances to District
Toledo Senior Amanda Navolynski advanced to the 1A District IV Track & Field Championships in Rainier by winning the pole vault at the Trico League Meet held in Stevenson on Friday. Navolynski jumped 9'6"during the competition.

Castle Rock Tennis Still Undefeated
The Castle Rock Tennis team had a busy week with defeats of White Salmon and Montesano on the courts. On Wednesday, Jamie Skeie and Faith Stein needed an extra set to close out their opponents in singles play at White Salmon. Mikayla LaFontaine was also successful in her bid, winning 6-0, 6-0

On Thursday, the Rockets hosted Montesano and treated the Bulldogs to a 4-1 loss.

Castle Rock tennis is now 13-0 on the season.

Lady Warhawks on to District Playoffs
The Toledo/Winlock girls finished the Trico League regular season with a double-header sweep on Stevenson on Tuesday and now look forward to the District IV Tournament in Centralia this week.

The Warhawks scored 24 runs in the 12-4, 12-10 victories over the Lady Bulldogs. Emily Robbins had three hits, with two doubles and two RBIs in Game 1. Kennedi Collins added two hits, while Taylor Thomas batted 2 for 3 with four RBIs. in game two Thomas and Nikki Smith each hit RBI doubles while Stevenson committed six errors.

The Lady Warhawks are now 8-10 on the season finished Trico League play with an 8-6 record.