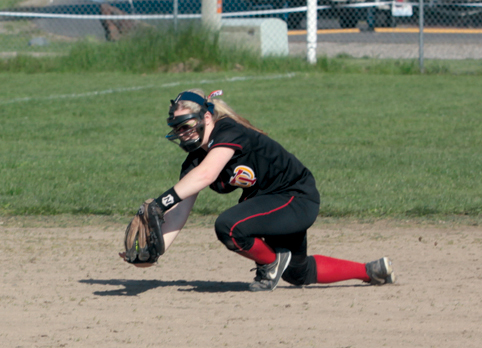 T/W 3rd basewoman Kennedi Collins not only swung a hot bat, going six for six over two games, but she flashed some leather at the hot corner.

Lady Warhawks Fastpitch Dominate CR
The Toledo/Winlock Lady Warhawks exacted a little revenge on Castle Rock Tuesday for several years of beatings by besting the Lady Rockets 23-3 and 11-1 in a double header of Trico League Fastpitch.

While most of the Warkhawks had success with the bat, Kennedi Collins went 6-8 and knocked in six RBIs. She also accounted for two doubles, two triples and a home run over six innings.

Shaylee McGinty also had a banner day in the second game as she went 3-3 at the plate.

The Lady Warhawks are now 5-5 in Trico League play and will host third place Kalama on Tuesday. T/W needs to hold onto the fourth and final playoff spot in the Trico League in order to advance to the District IV Fastpitch tournament.

CR Takes Over First Place with Sweep of Warhawks
Despite Division One college talent throwing pitches against them, Castle Rock took advantage of errors, had timely hitting and provided just enough pitching for a 2-0, 7-5 double-header sweep of Toledo/Winlock in Trico League Baseball on Tuesday.

Kole Beckers got the win on the mound for the Rockets despite allowing a runner in every inning and striking out just four batters. The defense behind him was stellar and the Warhawks contributed six errors defensively to allow the Rockets two runs in game one. Austin Elf accounted for one RBI in game one.

In game two, T/W came from behind to garner a 5-3 lead in the 4th inning behind errors and two Mack Gaul RBIs. The Rockets came back in the top of the 8th to score two runs. Riley Grothen delivered a clutch hit up the middle to drive in a pair of ultimately winning runs.

The Rockets lost a non-league game to Rochester on Friday to bring their season record to 10-7, but their 10-2 record entitles them to a first place in the Trico League. They now travel to second-place La Center for a double header and a chance at the league championship on Tuesday.

Toledo/Winlock is currently in fifth place with a 7-5 league record and will host Kalama at home on Tuesday in a doubleheader that may decide the playoff fate of both or either team. The Trico League fields four teams into the District IV playoffs.

United Still in Contention
Toledo/Winlock United Soccer is in excellent shape to reach the playoffs after they split two games this week.

On Tuesday, they took a 2-0 loss to league leading White Salmon. On Thursday, they traveled to La Center and managed a 2-1 victory in overtime. This week, United will visit neighboring rival Castle Rock and then return home on Thursday night for Senior night against Stevenson.

T/W is currently in 3rd place, two full games ahead of Stevenson and Woodland in the Trico League standings. The top three teams move on to regional playoffs.

On the girls side, Elizabeth Moore won the 100, 200 and 400 meters while Maggie Ashby won both the shot and discus events. Amy Patrick won the 800 meters by a wide margin. In the boy’s competition, Austin Moore was dominant, winning the high jump, 100, 200 and 400 meters. On Saturday, the Rockets participated in the Lewis River Invitational that included six schools. The boys were second behind 2A W.F. West while the girls were 4th in the team standings. Individual winners included Elizabeth Moore, who won the 100, 200 and 400 meters, as well as Elle Gallow in the discus. Brandon Tomlin won the long jump on the boys side while Nick Swanson took the top spot in the triple jump.

Toledo
Ashton Fraser won the 1600 meters at a Trico League meet hosted by Castle Rock on Thursday and served as one of Toledo winning athletes. Senior Danny Aguilar won the triple jump and was the only other male winner. In the girls competition, the Indian's relay team of Brooke Mikel, Amanda Navolynski, Sally Martin and Courtney Moore took first place in the 4 X 100 event.

Winlock
Chance Fisher was the only Winlock winner at an eight-team track meet hosted at Rainier, taking a victory in the high jump.