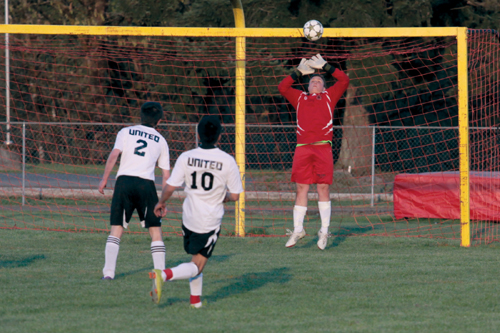 United Grabs Significant Victory
After winning five games in a row, Toledo/Winlock United soccer had to face the number one and two teams in the 1A Trico League and endured 2-0 and 6-2 losses to Columbia (of White Salmon) and Seton Catholic, respectively.

On Thursday, however, United bounced back in dramatic style with a come-from-behind victory over King's Way Christian. The Knights jumped to a 2-0 lead, but T/W scored two late goals to even the game and then Jacob Andrews scored the winning goal in the final minute of regulation play.

United is now 6-6 on the season and 6-4 in Trico League play and currently has a hold on the leagues final playoff spot with four games to go. They travel to White Salmon on Tuesday and La Center on Thursday.

Gaul Pitches Another No-Hitter
Toledo Senior baseball ace Mack Gaul struck-out 17 batters while allowing no-hits in a 10-0 rout of Columbia (of White Salmon) in the first game of a double-header on Tuesday. The Warhawks also won game two with a 6-1 victory.

Joel Martin had two hits and two RBIs in the first game while Chris Gove and Wes Kuzminsky each added two hits.

During the second game, Martin threw a four-hit game with nine strike-outs. The Warhawks belted 10 hits to produce the 6 runs in the triumph.

The Warhawks are 9-6 on the season and 7-3 overall and third in the Trico League behind Kalama and Castle Rock. T/W will face Castle Rock on Tuesday at CR's home field.

Lady Warhawks Split
Shelby Davison allowed just two hits in the first game of a double-header with White Salmon on Tuesday to earn a 10-0 victory. The Lady Warhawks allowed a major comeback and dropped the second game 7-6 in Trico League play.

Kennedi Collins went three for three with an inside the park home run based on an outfield error in the second game.

The Lady Warhawks are 3-9 overall and 3-5 in the Trico league and will visit Castle Rock for a double-header on Tuesday.

Rockets Split with Bulldogs
T.J. Catlin hit a single in the bottom of the seventh and batted in Riley Grothen to score the winning run in a 6-5 CR win over Stevenson in the second game of a doubleheader on Tuesday. The Bulldogs won the first game in a 2-1 defensive gem.

Robbie Simpson had four stolen bases and joined Grothen as both went two for four in batting. Austin Elf and Carson Horton were both two for five.

Castle Rock baseball is 8-6 on the season but 8-2 in Trico League play. They will host Toledo/Winlock on Tuesday on their home field.

Castle Rock
Austin Moore continues his dominance of area track with victories in the 200 and 400 meters, plus the high jump at a Trico League meet held at Ridgefield on Wednesday. Nick Swanson won the long jump at the meet with a leap of 19'0".

In the Kalama Twilight Meet on Friday night, Moore took the 400 meters and the high jump with a leap of 6'2". The Lady Rockets are also showing sign of consistency with Elizabeth Moore and Laura Patrick winning the 100 and 200 meters respectively at the Kalama meet. The same girls plus Freshman Harlie DesArmo in the high jump captured individual wins for CR. Elizabeth Moore also won the 400 meters in Ridgefield.

Toledo
Toledo's Alex Echtle was one of the team’s few individual winners, but as a group the Indians placed second in the nine-team Bruin Invitational held at White Salmon.

Echtle won the discus with a throw of 114'01". Teammate Danny Aguilar won the long jump with a leap of 19'9 3/4". Toledo scored many of their points with second, third and fourth place finishes.