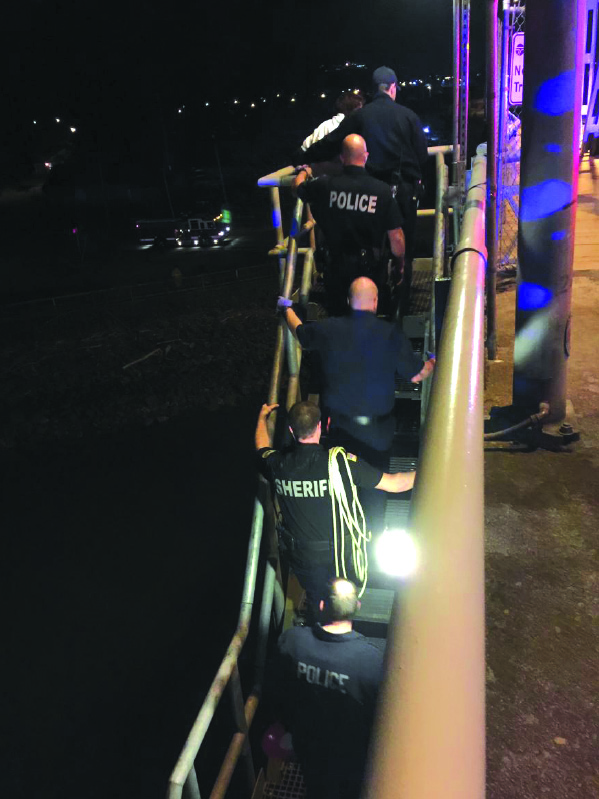 On Sunday April 3 at 2:06 am, Hoquiam officers were dispatched to the area of the Simpson Avenue Bridge regarding a female heard screaming for help.

Officer James Gaddis was the first to arrive on the bridge whereupon he located a 21 year old Hoquiam woman in the Hoquiam River below, desperately attempting to hold onto a bridge abutment.

Officer Gaddis was able to keep the woman in the light of his flashlight as additional Hoquiam officers arrived at the scene, including Officer Jimmy Wells and Sgt. Jeremy Mitchell. According to the report of Officer Gaddis, Officer Wells and Sgt. Mitchell, at their own personal risk, scaled the locked gate and fence at the top of the bridge deck in order to climb the stairs down to the lower mechanical structure of the drawbridge.

The officers threw a "rescue disk" to the female which is a small floatation device attached to a winding cord. With the rescue disk, Officer Wells and Sgt. Mitchell were able to hold the female from sinking and being carried away in the strong outgoing tidal flow as she had lost her grip on the bridge.

Sgt. Mitchell was able to use the rescue disk to pull the female toward the other side of the bridge so the water flow held her against the abutment instead of carrying her out into the harbor.

The woman told the officers she was not sure how much longer she could hold on.

There was no place for the officers to pull her clear of the water with just the rescue disk.

Grays Harbor County Deputy Sheriff Steven Beck was in the area and responded to assist the Hoquiam Officers. Deputy Beck produced a large, heavy rope from his patrol car and climbed down to assist Officer Wells and Sgt. Mitchell.

Officer Wells tied a rescue loop in the rope and lowered it to the female; she was able to wrap her arms around the rope and as a team, the three law enforcement officers hosted the woman approximately 50-60 feet out of the river to the bridge railing above.

Officer Wells then guided the woman up the ladder from the lower structure to the bridge deck above.

The woman laid on the deck in utter exhaustion and suffering from exposure from the frigid river water and tidal currents. The woman admitted she was high on methamphetamine and had been attempting suicide by jumping onto the concrete bridge abutment below.

Thankfully, the woman had a last second change of heart and fell just short of the abutment, instead landing in the river next to the concrete structure; she was also very lucky someone heard her screams and called 911.

The Hoquiam Fire Department transported the female to Grays Harbor Community Hospital for treatment and a mental health evaluation.

"I would like to commend the actions of Officer Gaddis, Officer Wells, Sgt. Mitchell and Deputy Beck for immediately putting aside their own safety to jump into action in order to rescue someone who was close to drowning," said Chief Jeff Myers. "Regardless of why she ended up in the situation, I have no doubt the officers prevented this woman's death and hopefully this will allow her to seek the help she needs."