Students at Toledo HS gather shoes for kids in Haiti 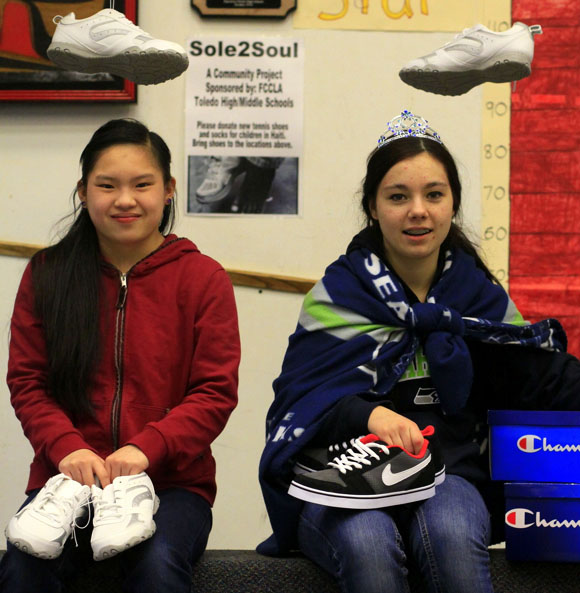 Elizabeth Stavig (left) and Brianna Beecroft (right) pose with some of the shoes they gathered at Toledo High School.  Stavig will be accompanying the shoes to Haiti with representatives of the group Sole 2 Soul.

Elizabeth Stavig, a student at Toledo High School, is set to learn a significant lesson. In the process, she has given some of her classmates and associates in the THS FCCLA an education as well.

The quiet Stavig came across the Sole 2 Soul project through her local church, and then brought the idea to Renee Ketchum, a teacher and FCCLA advisor at Toledo High School.

“We were talking about a community service project and we were doing survival kits,” explained Ketchum. “Elizabeth said that she had a really good one to do. That is when she brought up Sole 2 Soul. I said that sounds interesting. Bring me the information.  That is how we got started.”

That was back in late September and now hundreds of hours of work and four months later, the project has met it goal while spreading some world understanding along the way.

“We are gathering shoes for kids that don't have shoes in Haiti because they are required to have shoes to be able to go to school,” said Brianna Beecroft, who is the unofficial spokesman for the project because the demur Stavig would rather be a doer than a talker.

The goal to raise 100 pair of shoes became the project. The girls posted a progress chart in the commons at THS and when one couple that came for a basketball game saw it and they had not met their goal, donated 20 pair of shoes. New Balance also donated a significant number and the goal was not only reached, but surpassed.

Through connections in her dad's church, Stavig crossed paths with Amy Gowan and Mary Dahlke, who founded Sole 2 Soul project. All over the world, children lack shoes and many health problems accumulate due to parasites that enter their feet. Many countries, including Haiti, do not allow children to attend school without shoes.

“Haiti is the poorest country of the Americas and kids in Haiti can't go to school if they don't have shoes,” explained Ketchum. “We have been trying to get the message to go to school and you can wear flip-flops or whatever. They don't even have flip-flops to wear.”

The question often comes up in a program like this why not gently used shoes? Why brand new?

“Give them a brand new pair of shoes, because we are all excited when we get something new.”

Beecroft and Stavig sat in the commons of Toledo High School with about two dozen new pair of shoes they had helped gather and were surprised at the total. It is Stavig who will be able to place one of these pair of shoes on the feet of a little girl in Haiti.

“Cause you are a lucky girl,” Beecroft tells Stavig good naturedly.

In reality, she was invited to go with the founders of Sole 2 Soul (Gowan and Dalke) because of her efforts at Toledo High School and in the greater community.

“It has had a big impact on the students that have been working on it,” said Ketchum.  “They realize that they have opportunities other kids don't have. Elizabeth is going to see that first hand when she goes back to Haiti.”