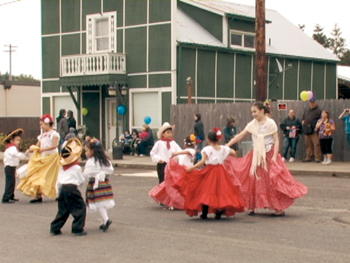 Dancers with Mexico Within the Heart perform during May Day last year and are schedule to take part in the festival again this weekend. Founded and organized by Winlock instructor Rosie Luna, the program teaches students about Mexican folk traditions.

Lewis County’s summer festival season will be kicking off this weekend, accompanied by a series of performances from Winlock’s Mexico Within the Heart dance program.

Founded and organized by APOLO instructor Rosie Luna, the program consists of Winlock students from all grades and backgrounds and seeks to teach the audience, as well as participants, the history and significance of Mexican folk dancing.

"We cover pretty much all the regions," said Luna, stating practice begins with asking Hispanic students to share where their families are from, then learning the styles and traditions of those areas. "It’s a mixture of everything. We have all-girl dances. We have all-boy dances. It really just depends on the group that’s with me that year."

The students practice
and perform in three groups, with Luna teaching kindergarten through second grade as well as middle and high school, while Elementary School instructor Julie Spalding handles third through fifth grade. Luna said students of many different skill levels and ethnic traditions have been part of the program, stating they do not need to be experienced or Hispanic to participate.

"I welcome anybody who wants to do it to come and learn," she said, stating students with greater proficiency are asked to help train those who are still getting the hang of things so the group as a whole can grow. "They’re learning how to teach each other, and at the same time I’m coaching the entire group."

Students are also involved in music selection, with this year seeing the inclusion of more contemporary Mexican dance music in addition to traditional songs. Luna said the contemporary music may feel more familiar to audience members, as it resembles country and western, but students hope to show the similarities both in dance and accompaniment to the older, folk styles.

Their next engagement will be Friday at Winlock Miller Elementary School, where they will perform during the Student of the Month assembly and share Mexican culture with students in time for Cinco de Mayo. Then Saturday will be a show in Vader for May Day, the first of many festival appearances to also include Egg Day, Cheese Days and other summer festivals in the area. They will also be performing during an assembly for high school and middle school students May 17, which Luna said will also feature traditional food served to teachers by students ready to share the history and significance behind the meals.

Luna added her students are happy to engage the community and would welcome invitations to perform at other public and private events.

"We’d love to perform for anyone who would like to see us," she said.

To learn more about Mexico Within the Heart, including how to schedule a performance or information about their ongoing fundraisers, call Luna at (360) 520-3174.