Anglers gather to view the final weights of the last entries in Saturday’s Steelhead Derby held in Toledo.

More than 50 anglers turned out Saturday for the third annual Steelhead Derby in Toledo—one of many continuing successes for community organizers with vision:Toledo.

This year’s derby was dedicated to late community member Greg Rakoz, who was remembered as "a great friend and fisherman."

Though no one was able to come close to the 15-pounder that won last year’s derby, the largest fish of the day had more pounds than its captor had years—a 9 lbs. 12 oz. salmon caught early in the day by 8-year-old Toledo Elementary School student Zane Ranney. Ranney had caught the fish around 7:30 a.m. on the Cowlitz River and said fishing, for him, is a chance to go out, have fun and see what he can catch.

The largest fish in the adult division weighed 9 lbs., caught by Steve Bean, and second-largest weighed 8 lbs. 8 oz., caught by Kurt Wallace. The mystery weight this year was 7 lbs. 6 oz., and angler Reese Wallace won in that category.

Prizes from area businesses, including rods, reels, tackle and other fishing accessories, were raffled off to participants at the end of the day before a cookout featuring salmon caught and donated by members of the Cowlitz Indian Tribe.

Organizer Rick Lovell said around $1,000 had been raised during the event, one quarter of which will be given to Friends of the Cowlitz and one quarter to vision:Toledo, with the remainder used to cover derby expenses.

Lovell said residents can definitely count on a third derby in 2014, but should plan for the fourth Saturday in July rather than the third so as to coincide with plans for Riverfest 2014. 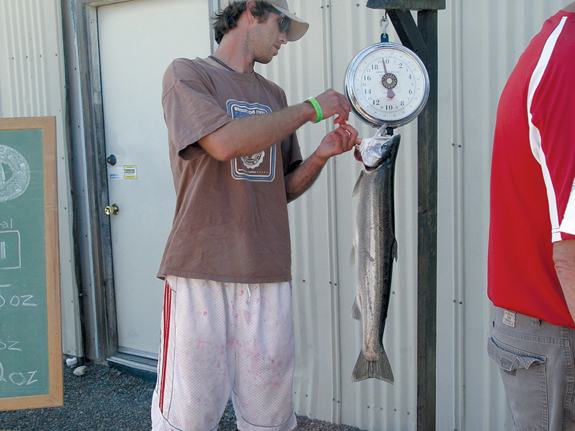 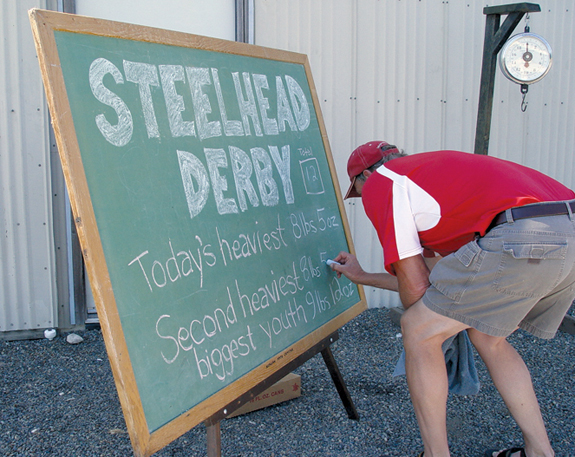 Organizer Rick Lovell updated the leader board as larger entries as brought in.

Steelhead given by the Cowlitz Tribe are prepared by John Morgan (left) and Guy Buzwell (right).