Speaking out on Crude oil 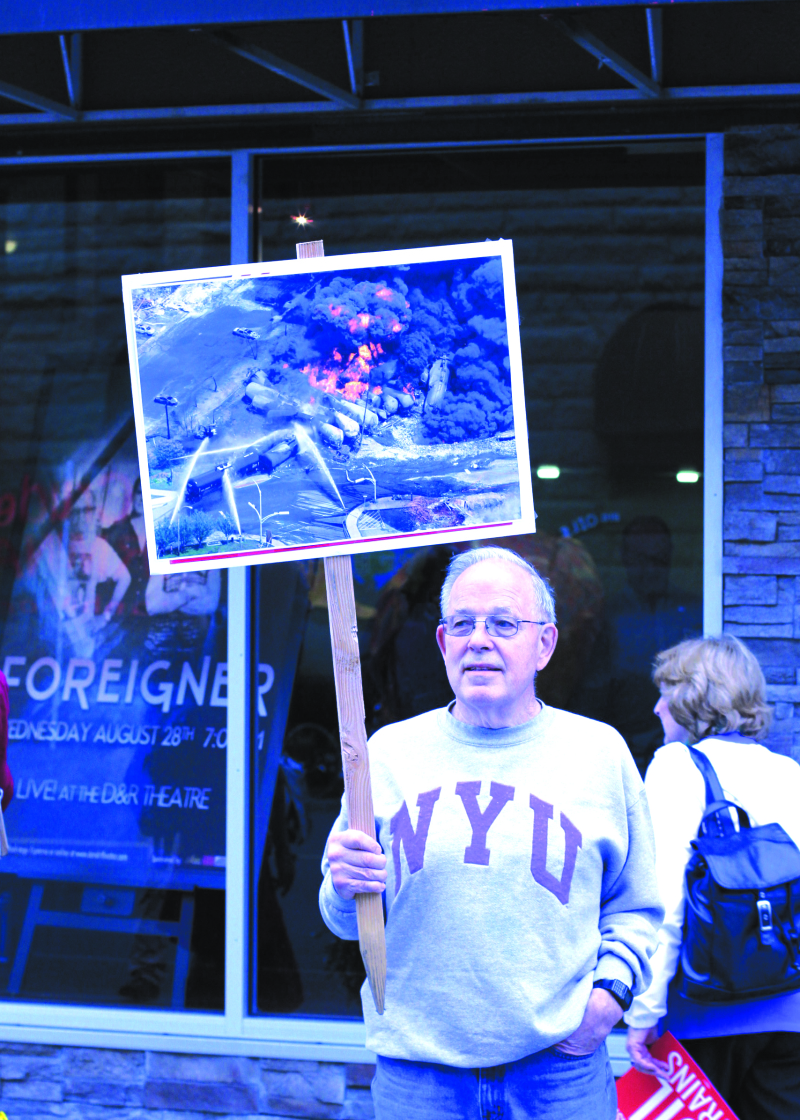 This "Oil Train" protester is displaying a photo of the deadly oil train accident that occurred in Quebec Canada that claimed 47 lives. The protester was participating in a rally outside of the D&R Theater last Thursday between hearings

The Port of Grays Harbor has recently proposed a project to develop crude oil facilities. The Port of Grays Harbor is Washington's only deep water port on the Pacific Coast, and the crude oil would arrive by rail, to be transferred to storage and then loaded onto ships. The companies are working with local, state and federal regulatory agencies to ensure that all safety and environmental protection measures are considered as they decide whether this project is viable. The lead agencies involved are the City of Hoquiam as well as the Washington State Department of Ecology. A public hearing was held by the Department of Ecology regarding the oil train terminals in Grays Harbor at the D&R Theater on Thursday, October 8. Opposers of the terminals were given a chance to present to a panel of representatives from the Department of Ecology. Some of the protesters were prominent figures in the Grays Harbor Community, such as Quinault Indian Nation President Fawn Sharp, among others. Much of the comment from the public came in the form of accusations that the companies that own the terminals are ignoring moral considerations of the environment, animals and people for the favorable corporate gain. Many of them came to present what was in their mind a better idea than running crude oil through Grays Harbor, or simply to protest the proposal.

The speakers were given numbers in the order of when they would speak, one of the first speakers was Peter Cornelison, of the Hood River City Council.

Cornelison referenced the Columbia River Gorge, as it pertains to his area: "Our council passed a resolution in 2014 opposing oil trains through the Columbia River Gorge National Scenic Area, and I'd like to describe two of the impacts to our region from additional oil trains such as what would be put forth by this proposal," said Cornelison. The Hood River Council Member went on to detail the two big problems that oil trains coming through could present for the Columbia River Gorge. "One of the problems is fire, you may have heard of the winds that happen in the summer and the winter at the Columbia River Gorge, they are quite strong, 30-40 mile an hour winds," Cornelison explained, "An oil train that caught fire in the gorge could send a fire down wind or up wind at a very fast rate through the gorge, threatening both Oregon's and Washington's side of the river." Cornelison then went on to list what he thought was the other big problem presented by the oil trains, which came to be a common theme throughout the meeting: "The other nightmare scenario put forth by the Army Corps of Engineers, which is if an oil spill happens near one of the dams, the oil would impregnate the concrete in the fish ladders and it is known that the fish would no longer use the ladders." Protesters keyed in on the devastation that an oil spill would impact on the local wildlife and ecosystems.

After several other protesters came to the podium with more examples of why the oil terminal would hav a negative impact spoke, a member of the public, Eric Stritt spoke, and keyed on the fishy statistics that have been presented in favor of the oil terminals. "I live in the Bakken blast Zone in White Salmon Washington," said Stritt. "The accident data clearly shows that there's one derailment every 600,000 miles. Now that might sound good, but the 19 oil trains per week that pass by my house, log about 600,000 miles every six months," said Stritt. Stritt went on to explain that the statisctics can be broken down and concluded to be one derailment a year on the Columbia. "Most of those will spill and about half are shown to explode. We must stop the fossil fuel madness."

The hearing went until 4:30pm, and a rally was held outside of the D&R Theater around 5pm, before the second round of testimonies would be heard at the second session of the hearing. Protesters lined Wishkah and Heron Street with red anti-oil terminal signs and all dressed in red. The rally featured more speakers that spoke to the pubic as apposed to the panel. The rally was over at about 5:30pm, and the second hearing concluded at 9pm.