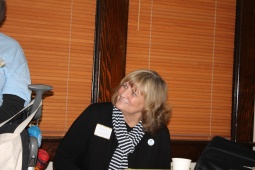 Photo by Sally Kunke Governor Jay Inlee’s wife, Trudi Inslee, said she had a great time at the Crab Feed.

“I want to thank the people of Pacific County for this award,” Spackman said. “I’m kind of a little bit overwhelmed by it. I was totally surprised.”

Hess told the Herald after dinner, “I was really surprised to be named Democrat of the Year with my wife. We really do work together as a team. She has been much more influential with directing the course of Pacific County Democrats than I.”

Newly elected Governor Jay Inslee was unable to attend because of illness, but the state’s First Lady, Trudi Inslee, was in attendance Inslee spoke briefly. “He was up coughing all week with a tickle in his throat,” the First Lady said. “He’s really missing this crab feed and said that he really appreciates the help from all of you to help get him elected. Our door is always open in Olympia.”

Before dinner, the First Lady told the Herald to invite “Pacific County constituents to contact the governor and tell him what issues they are concerned about.”

The First Lady went on to say, “The Crab Feed is a wonderful event and great fun. There are many exciting things that Democrats need to work on.”

Pacific County Treasurer Renee Goodin told the Herald that the Crab Feed brought in a good amount of money through the live auction, silent auction, raffles, and the dinner. Goodin also thanked the First Lady for attending.

“It was really nice of her to come,” Goodin said. “It wasn’t an election year and the crowd may have been down a little, but we still did really well.”

The featured speaker for the Crab Feed was U.S. Congressman Derek Kilmer, who represents the Sixth District and lives in Gig Harbor.

Kilmer said that he would fight for Democrats so that whey would not have to stand in line for hours to vote like they did in many states throughout the country because of newly imposed Republican’s governors regulations.

State Representative Dean Takko (D-Longview) said, “it’s been tougher in Olympia and our budget situation isn’t good, but we’ve got the right values.

State Senator Brian Hatfield (D-Raymond) said, “We need to keep fighting. We need to fight their (Republicans) attacks on women’s rights, worker’s rights and their pandering to the no new taxes crowd.” Hatfield said Republicans philosophy about no new taxes is destroying kindergarten through the twelfth grade education in the state.

“Pandering to the no new taxes crowd will not solve the problems of this state,” Hatfield said.

Two letters were read from U.S. Senators Patty Murray and Maria Cantwell. Both letters talked about the recent death of former Governor Booth Gardner and State Senator Sid Snyder. Senator Cantwell thanked Pacific County for helping her get elected again. “Pacific County delivered in a big way last November,” the letter said. Both Senators said they wished that they could have attended the Crab Feed.

Marsha Manning told the crowd, “Democrats need to take back the Third district.”

Former state senator, Craig Pridemore, who was the auctioneer for the event, said,  “It’s time to send Jaime Herrera back to where she came from.”