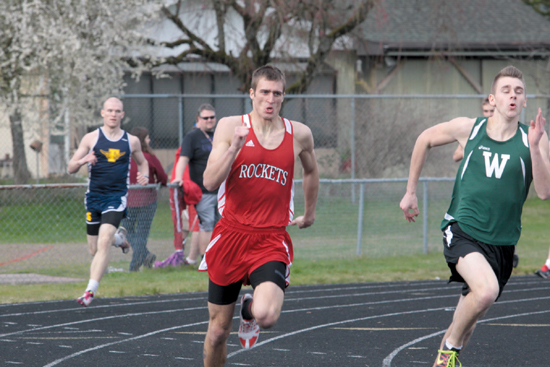 Castle Rock's Austin Moore (center) is challenged by a runner from Woodland in a track meet earlier this season at Castle Rock.

Two weeks ago, it was Brittany Moore that was featured in Town Crier Sports and, true to form, Brittany and cousin Austin Moore, seniors at Castle Rock High School came through in the classic 400 meter race as champions at the 1A District IV Track meet at Rainier last week.  Both are now heading to the next level.

Austin is returning to the big stage on the campus of Eastern Washington University where he has been a competitor for the last three years. Last year as a junior, he placed 2nd in the 400 meters at the 1A WIAA State Track Meet. Currently, he has the 2nd fastest time behind another Moore (Alexander Moore of Charles Wright Academy in Tacoma), with his season best 50.51.

Austin will also compete in the 200 meters where he is unranked and will be a challenge just to make the final.

Moore has been a versatile athlete throughout his career at Castle Rock.  He played football where his speed was always a threat for four years and then saw a significant role the basketball court this last winter.  He also spent time playing on the local Babe Ruth baseball team until he aged out.

"He Was an outstanding offensive player for us at tailback last season and a great threat at kick-off and punt returns,” said CR Football Coach Ben Suhrbier.

"He had over 200 yards rushing versus Toledo which was by far his greatest game of his career," said the coach about the team's biggest win of the season.  "He was our greatest offensive weapon who was helped considerably by the blocking of (Levi) Godinho at Fullback."

"Austin is a gifted athlete," says Johnson. "He has great quickness and speed that translates to all three sports." (football, basketball, and track).

There is a long history of Moore athletics at Castle Rock.

"My family are the biggest supporters," said Moore. "They are at every sporting event and always make sure that I am doing my best to be a better athlete. My family is very athletic and have been in many state appearances which makes me strive to be the best I can even more."

He has derived most of his accolades from Track and Field and football. As a freshman, he bounded onto the scene by winning the high jump at the state Track and Field championships. In football he was credited with five special team returns (punts and kicks) during his junior and senior years.

In the classroom, Moore excels, even while residing in classes like calculus, AP English and physics. In addition, he has been chosen as class President for three years running. He has battled through those demands and still sports a 3.3 GPA. His future plans include going to Lower Columbia College for two years and then returning to Eastern Washington University as a student in anesthesiology.

The final chapter of his high school athletic career however, will be played out this Friday and Saturday on a red track, 363 miles east of Castle Rock.
Read more from:
TC - Sports
Tags:
None
Share: