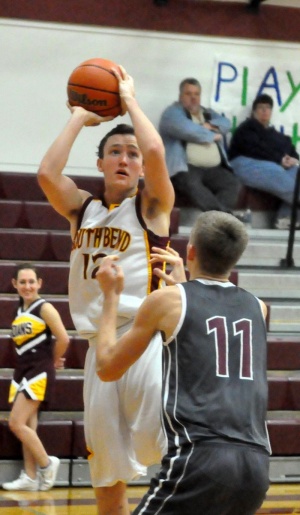 Darol Ratsavongsy ruled the boards with 22 rebounds. He also handed out 6 assists, scored 4 points and stole the ball 3 times. Kason Koski scored 10 points, pulled down 6 rebounds and dished out 4 assists.

Koski and Newman fueled Raymond's offense with 17 points apiece to propel the Seagulls to a 57-45 road victory over Elma last Thursday.

Ratsavongsy rang up 11 points and hauled in 11 boards for a double-double. Freeman scored 8, made 7 steals and gave out 3 assists.

“The boys are playing with the intensity that is necessary to win ball games,” Raymond HS interim coach Ron Bell told the Herald. “It was a total team effort against both Elma and South Bend. Our defense has stiffened up and our movement on offense has improved.”

Montesano pulled away from South Bend in the second half during a 43-32 win last Wednesday at Koplitz Fieldhouse.

The Indians led 17-14 after the first quarter and 24-23 at halftime. The Bulldogs outscored South Bend 9-4 in the third quarter and 11-4 in the final eight minutes.

Elliott led SBHS in scoring with a dozen points and Miles Davis was down with 11 points.

The loss dropped the Tribe to 2-14 overall.