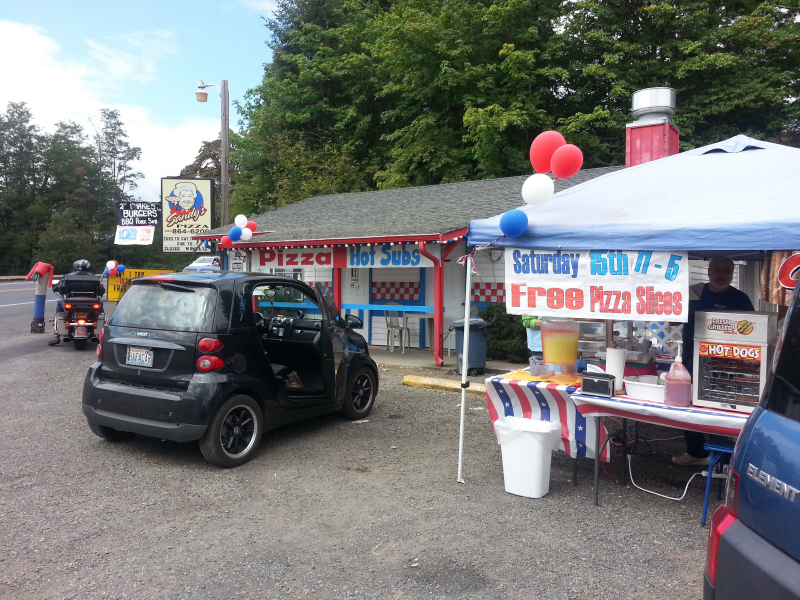 Ten years and counting....It all started in 2005 when Sandy Spurlin and his wife, Louise, were new to the town of Toledo. Before they had even bought a house in this small town, they bought a pizza parlor. Little did they know this tiny shop would make it to see a 10th anniversary.

Leaving behind San Diego and a phone company that he owned, Spurlin and his wife arrived in Toledo where they saw that a shop called Cruisers was for sale. "We thought, "Oh, we would like to do that, a pizza place for sale and we came in and bought it." Spurlin stated. Starting out with a new shop and no prior experience to the food business, they started off with just pizza and added to it. With these additions, Spurlin added some special touches to the pizza, including his secret sauce that no one but he knows the ingredients to. "If I ask the people what they like about our pizza, it's usually number one, the crust; which makes the pizza, in my view. And then number two, the sauce, which we changed and I added my seasoning, and my wife doesn't even know what it is." Another one of their great additions to this shop is their long menu. Now customers can buy anything from sub sandwiches to delicious milkshakes. "I made a Sandy's Sub, it's the local favorite. It's got everything on it. I just made it how I would like it." Spurlin said about one of the menu items. Just recently they added burgers to the menu.

With all these great achievements and support from the customers, Sandy's Pizza has just celebrated their tenth year. For the great celebration, they gave out over 50 free pizzas and had ten dollar pizzas for sale. "Any pizza for ten dollars, for ten years" Spurlin laughed. At this event, many usual customers came in while there were many new customers who were driving to and from Mt. St. Helens. "We had a great time at the party." Spurlin said about the great anniversary.

As the celebration of the tenth year has come and gone, Spurlin gave thanks to the people who have helped Sandy's Pizza become the shop it is today. "I would like to thank my wife, she really is an organizer and she's put together all this." Spurlin said as he gestured to the surrounding posters in his shop. "I just got to thank the customers that have been with us through the thick and thin. That have stuck with us." While Spurlin states that it's mainly about good food and the cooking he was able to learn from his mother, he likes to reflect that the friendship is such a huge factor as well. "I would just like to thank the whole community for the support from Toledo."

So while the tenth year anniversary is over, we can't wait to see what the future is cooking up for Sandy's Pizza.