Rise of the learning dead!

Guests of the Winlock Library were able to find their inner re-animator Friday as they turned themselves—and more than a few Barbies—into zombies.

Part of the Summer Reading Program, last week saw libraries across the Timberland Regional Library District celebrating books and elements dealing with the theme of "Beneath the Surface," including the surface of a grave.

Standal said Winlock took the event one step further this year with the addition of Barbies (and a few Kens) for kids to paint and style into their own version of the undead.

Most kids wasted no time in shearing off hair and extremities before giving their dolls a full-body makeover in grayish-green with vibrant red highlights, as it were. Some dolls were even given back stories about how they had been turned and none were without clothes made as gruesome as their bodies.

Not as many takers opted for making themselves up, but the kids were welcome to grab a set of instructions and get started while Standal remained available to assist. One technique used that day was to lather Elmer’s glue on one’s skin and lay tissue paper over the glue, peeling off the paper that did not make contact with the adhesive. Once dry, the glue and paper provide an uneven surface which, when covered with foundation and enough yellow and green to produce some good bruises, begins to resemble portions of flesh that have seen livelier days. Polish it off with some dabs of fake blood, and you’ve got grievous open wounds that say to the person next to you, "I shouldn’t be walking around, but you should be running."

In keeping with the library’s goal of engaging young readers, these events remained rooted in literature. Among the books recommended by the library for young adults looking to find out more about what lies "Beneath the Surface," Timberland recommended Dearly, Departed, by Lia Habel, Dead City, by James Ponti, and The Zombie Survival Hand Guide, by Max Brooks. 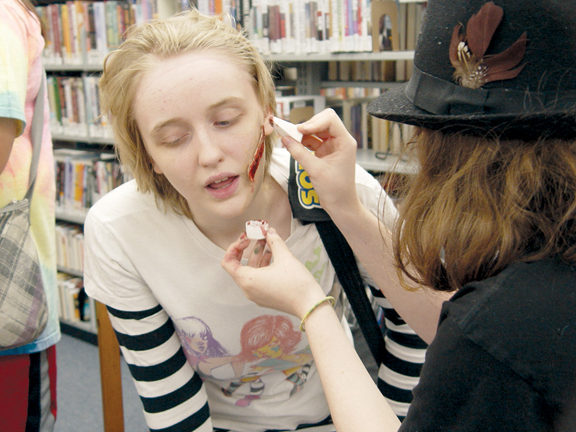 Cristen Bodeker (left) receives a fresh scar on her cheek, applied by Breanna Bodeker (right), during Zombie Zoo at the Winlock Timberland Library Friday, an event held as part of the Summer Reading Series. Attendees were given instructions on how to apply stage make-up to zombify themselves and others among other activities. 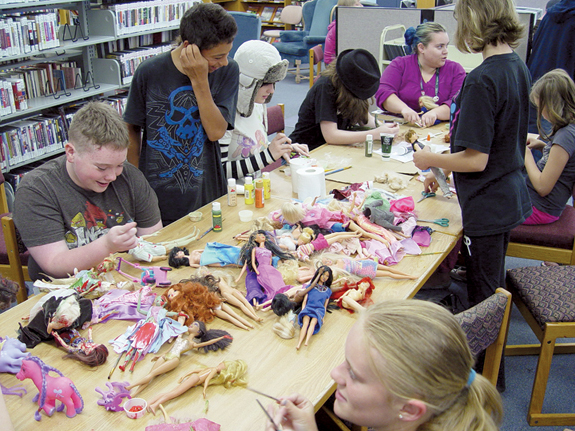 The main attraction offered Friday was a chance to turn Barbie Dolls into zombies, a first for the library. Children were quick to start painting, dismembering and gruesome-izing the dolls, which had been acquired by the library at Goodwill. 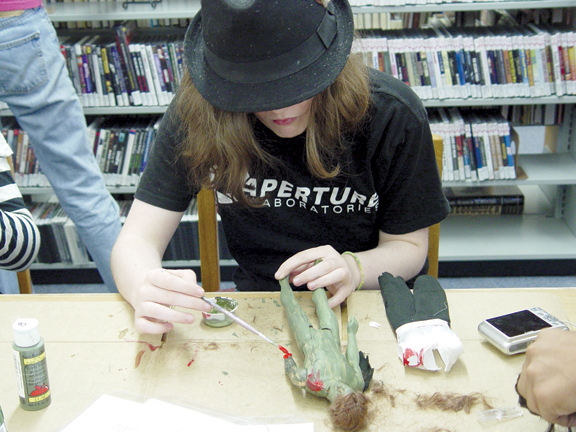 Breanna Bodeker adds detail to the injured arm of her zombie Ken Doll, whom she said had been turned after receiving a bite to the shoulder. 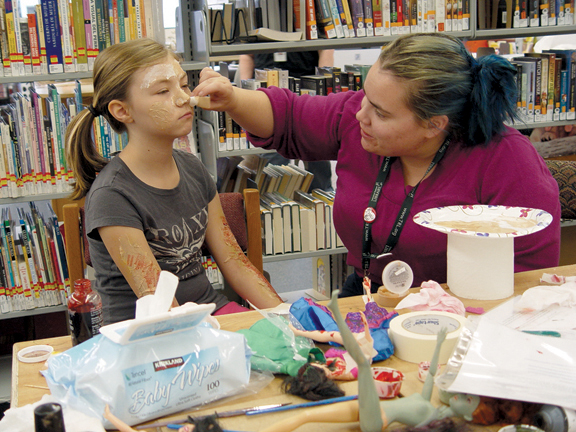