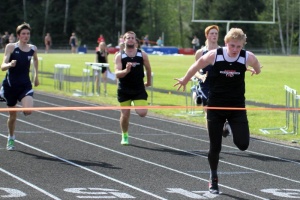 Photo by Larry Bale...Raymond's Rayce Newman won the 200 at the State Meet.

“It was an amazing weekend for the Raymond track team,” Raymond HS Head Track and Field Coach Mike Tully told the Herald. “We had two state champions, two school records, and a team championship.

“Hannah Dykes started the weekend by taking control of the triple jump competition with an opening jump of 35-1 to take the lead and never looked back,” Tully said. “On her third jump, she leaped 35-2 for her winning mark. It was a great accomplishment for Hannah. She had taken fifth in the triple jump the previous three years; so it was nice to see her hard work pay off.”

“The boys trip to the title started on Friday with Rayce Newman in the long jump,” Tully said. “Rayce popped a 1-foot PR in the long jump (21-2) to take second. Rayce continued his excellent meet the next day by winning the 200 in a school record time of 22.68. The previous record of 22.82 was set by Jesse Buchanan in 1994. Rayce also ran fourth in the 100.

“Ally Phansisay also came away with a new school record in the triple jump, breaking his week old record of 44-1 by leaping 44-8 to finish second,” Tully noted.

“Alex Vaca ran to a PR in the 400 in finishing third,” Tully continued. “Jayce Freeman and Hunter Borden ran fourth and sixth respectively in the 110 hurdles. “We took nine boys to the meet and all nine scored,” Tully beamed. “It was truly a team championship. Everyone contributed to the win. Our depth has been our key all season, and it was especially important this weekend. This was our first team title since 1969, when we won the 1A title. I told the boys on the first day of practice that if they worked hard, we had an opportunity to win the state title this year. They did what they needed to do and were able to accomplish this goal. It was a great way to end a great season.”

The South Bend girls were seventh with 76 points; Willapa Valley was 10th at 50, and Raymond tied for 19th at 20. Colfax won in a runaway with 198 points; Northwest Christian of Lacey was second at 130.