Raymond Seagulls open with a win 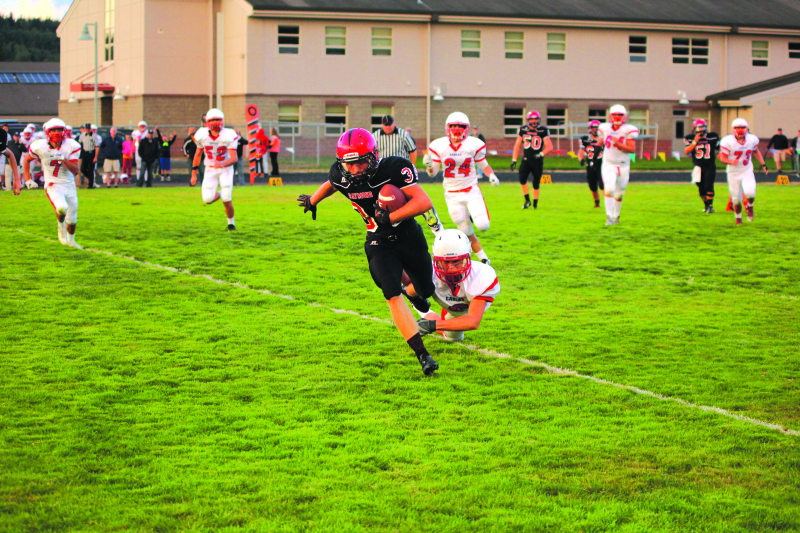 Senior Elliott Murdock takes it through the Eagle defense during the season opener. Raymond was able to pull out the win 26-25.

With the start of the new school year the Seagull athletes are back in action. The first Raymond football game hosted Life Christian Academy and skirted past them 26-25.

Both teams primarily running, LCA was able to score on their initial possession. After a Raymond sack of LCA quarterback Jack Hohimer, the next play the Eagles attempted a pass play and Hohimer was able to run in the ball not finding an open receiver.

The Seagulls took the ball and ran down field also for a touchdown, but a missed conversion held them back from a tie.

Raymond was able to bring the Eagles into a punting situation and returned with another score by Elliott Murdock with an 8-yard run. During the second quarter the Eagles managed to tie the game at 13 but Raymond took only three plays to go out front again on a 56-yard pass and run.

This opened up the Eagle passing game who brought the game back to one point on their own 35-yard touchdown pass. With LCA on the move once again, Jace Duckworth took the wind from the Eagles sails with an interception. An unsportsmenlike conduct foul on LCA provided the Seagulls with an additional 15-yards. This time the Eagles were able to hold Raymond, as the clock ran out for the half.

A second half Raymond fumble gave the Eagles an extra opportunity to score but the Seagulls were able to hold their attack back. Through the third quarter each team tightened up on their defenses and the game went scoreless. It would be down to the final 12 minutes to determine the winner of this back and forth gridiron match.

With LCA driving down the field, Seagull Duckworth again robbed one out of the air, but Raymond lost possession with a fumble recovered by LCA. Momentum would shift again as Jayce Freeman made an interception, but placed the Seagulls a little deep a field. But only four plays later, the player that stole the ball from the Eagles, connected with quarterback Kason Koski for a 65-yard touchdown run. Freeman had brought the Seagull lead to 7-points. To try and put additional pressure on the visiting team, coach Luke Abbot decided for the two-point conversion, but Raymond was not able to convert. In the next possession by the Eagles, the combination of air and ground attack drove them to the red zone and Hohimer was able to locate Josh Beasinger for another LCA score. The Eagles also attempted a two-point conversion, and the Seagulls denied them keeping a one-point edge with three minutes left in the game.

Raymond was able to keep control of the ball, even recovering their own fumble and took a knee in the final seconds to win the game 26-25.

The Seagulls are on the road this week facing Chief Leschi, kick-off is 7 pm.