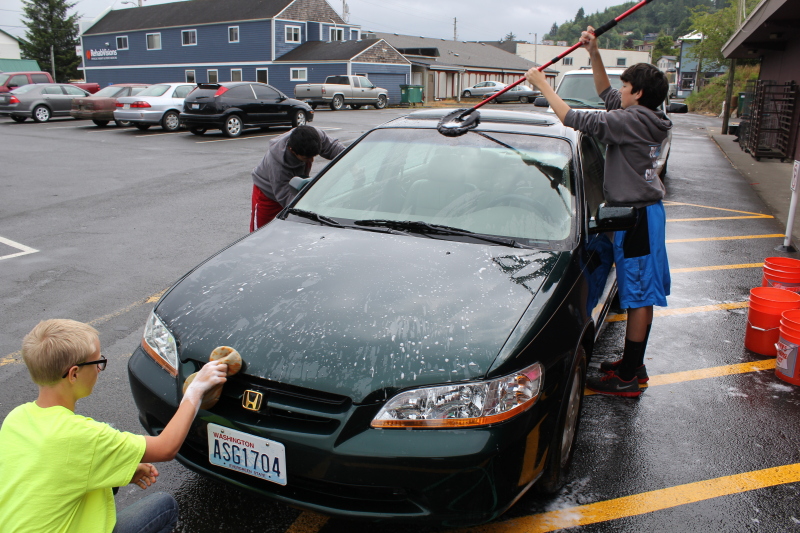 Members of the Raymond High School Band are working their way to Disneyland. The car wash is just one of the ways the band is looking to raise money for their Spring Break Adventure.

The Raymond High School Band is out making money for a trip to Disneyland next year.

Last week and this coming weekend members of the RHS Band will be washing cars at the Pioneer Grocery in South Bend.

The group will need to raise $25,000 for the trip that is scheduled for Spring Break 2016. The group is also holding bake sales along with their car washes and are planning more fundraisers during the summer and school year to meet their goal.

Third year Band Leader Christina Bailey is hoping to take the 25-piece band to visit and play at Disneyland, have a clinic with a college and maybe even catch a ride or two at the theme park. The adventure will be a four day, three night visit and will cost each member about $1,000 per band member. Bailey is also seeking grant money to help offset the cost. The program will allow the band to fly to Disneyland, stay in a hotel, visit and play a concert in Disneyland, and also visit Medieval Times and have a band clinic with a local college that will help expose the band members to the next level of performance.

Bailey is responsible for the entire music program for Raymond from K-5, has a 6th grade Band and well as runs the high school band.

The group will also hold silent auctions, hold concerts to raise money, host dinners and is trying to put together a rummage sale and possibly a plant sale.
"Right now we have a concert band, and I would like to get a jazz band together in the future," said Bailey.