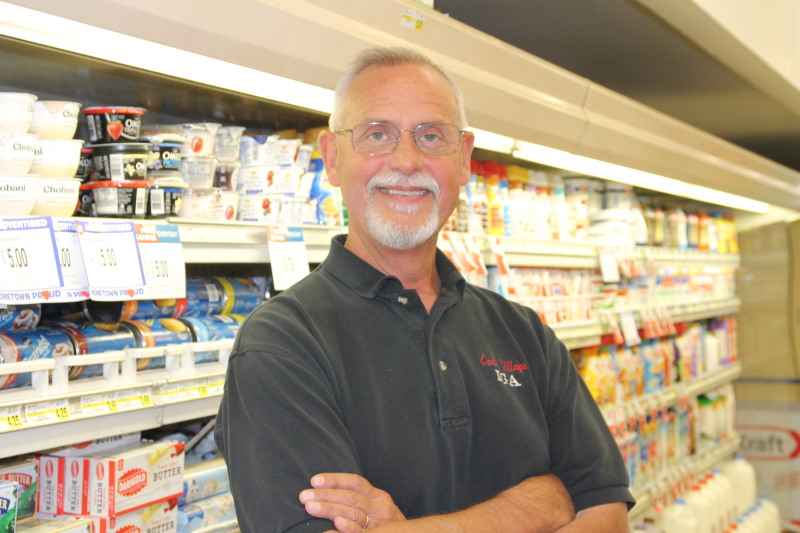 Every now and then you come across someone who has dedicated their time not just to their job, but to the community as well. That person to me is Paul Malarz. Paul is retiring from IGA Cedar Village on Friday after 38 years.

Paul was raised in Winlock since junior high. He graduated high school in 1975 and married his high school sweetheart Cindy Musgrove. Paul and Cindy briefly moved to Longview, but after a while he wanted to go somewhere else, one of the big cities. Paul and Cindy changed their minds, "We soon realized, though, that Winlock was a great place to raise kids," stated Paul. So they moved back to Winlock. He had a few different jobs starting with the Winlock Family Market and the Jorgensen Veneer Plant. Then "Raleigh called me in August of 1980 to see if I was still looking for work and I said yes," continued Paul.

He has been at Cedar Village for 38 years, starting with counting and checking the tills.

Paul is now the frozen food and dairy manager. He takes care of every customer that needs his help. You can tell he loves his job just by the interaction one has with him. "I love my job," he said. "I really do, but I decided to retire and spend time with my kids and grandkids."

Paul enjoyed his job, "the people I work with was the best part of the day, we are family. I also enjoy the customers that come in, I always ask them how they are or about their family," stated Paul. There isn't a time when many of us have gone in to the store when Paul hasn't asked how a family member is doing, or just to say hello.

Paul has also been an integral part of Winlock, he served on the school board from 1997-2010. Coached Little League for 6 years, plus he coached 2 years of youth football, he coached junior high football for 2 years with Ron Gall. He is a member of the Lions Club, 8 years as Treasurer for Winlock Rec Basketball, where they did a lot of fundraising. He was also a member of the Booster Club when it was active in Winlock. It's seldom you meet a person of this quality, one who has sacrificed a lot for his community, Paul is one of those guys. Always there to lend a helping hand.

Raleigh Stone, Owner of IGA Cedar Village stated, "In 38 years, he has never missed a day of work. He will be missed because Paul has been a big part of our success. Our children grew up together and he has been like family. The bond and friendships he has made with customers and employees will last a lifetime. Paul has said many times he loves us and we love him. I wish him well in the next chapter of his life."

While we know he will have fun with his children and grandchildren, we who go to Cedar Village will miss his presence. When you leave the store after talking to Paul, you always have a smile on your face. Winlock will miss you Paul, more than words can say!