One in custody after Hoquiam Police face 7 hour standoff 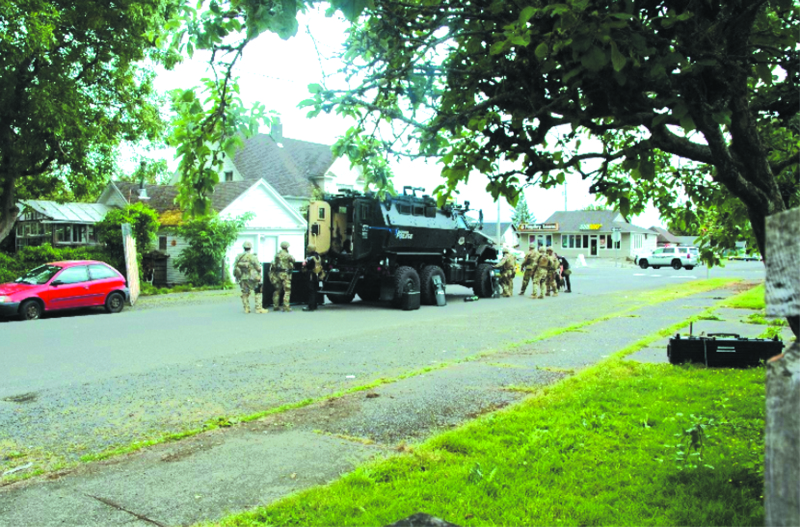 On Tuesday, May 24 at approximately 6:21 am, Hoquiam Police were advised of a male firing a weapon in the 2700 block of Simpson Avenue. Upon arrival they observed a blue 1980 Volvo with virtually every window shot out. The investigation revealed a 41-year old Hoquiam male had been living in a makeshift apartment behind 2701 Simpson Avenue, and for unknown reasons went outside and shot the windows out of the Volvo before returning to his apartment.

Hoquiam and Aberdeen Officers surrounded the residence and called for additional resources. Nearby residences were evacuated, traffic was detoured and the school district and Grays Harbor YMCA were notified. Hoquiam Police Department established a command post approximately a block away with an Incident Management Team for the duration of the incident.

Negotiators spoke to the suspect for several hours, the suspect expressed several demands before he would surrender, to include watching a movie and drinking alcohol. The CRU team breached the garage door to conduct an entry, but the suspect later picked up the door to block the view. When the CRU team approached the door again, they came into contact with the suspect. The suspect failed to obey the orders of the officer to show his hands and surrender. CRU officers used less-than-lethal force options to subdue the suspect to bring an end to the 7-hour standoff.

No bystanders or officers were injured in the incident, the suspect received only a few minor injuries which were treated at Community Hospital. The suspect was booked at the Hoquiam City Jail so he could sober up before an interview with detectives as he was extremely intoxicated.

The man was booked into the Grays Harbor County Jail the next day, for felony Malicious Mischief in the 2nd degree. Additional charges could include Discharge of a Firearm in the City Limits and Reckless Endangerment as a house across the street behind the car was struck by errant pellets from the shotgun used, The shotgun was recovered from the apartment.