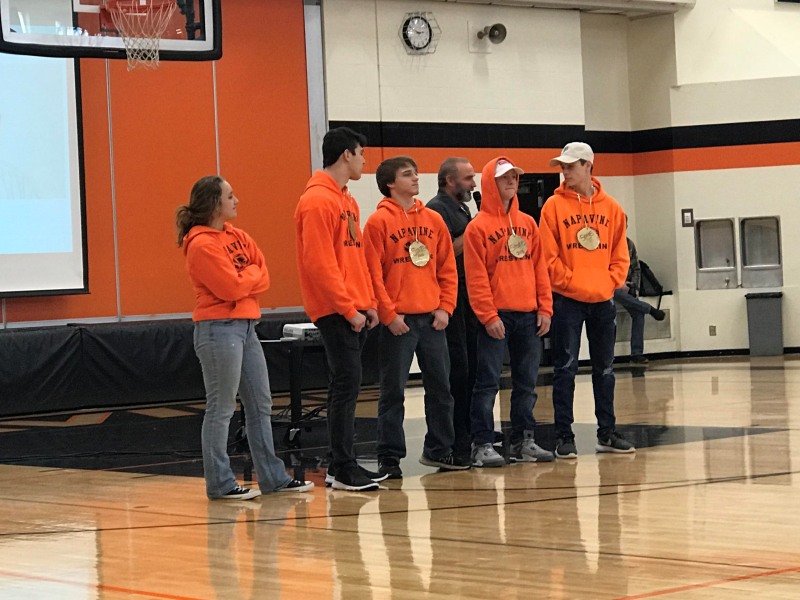 Napavine's wrestlers are noted for their strength, perseverance and great attitudes. Since wrestling requires patience, sacrifices and mindfulness, our athletes dedicate everything they have. A team of Napavine's students decided to dedicate an entire assembly to Coach Jay Terry and his wrestling teams.

Napavine had four boy athletes headed to the State Championship. Kaitlin Bornstein accompanied them as she might've been able to participate as a sub as well.

Sydney Burdick also tagged along to watch and cheer on her teammates.

Chase McCarter is a Napavine sophomore. He weighed in at 120 lbs. He is notable for his extreme strength. This was his first year on the Napavine High School wrestling team. At the assembly, he was beaming with joy.

Joey Krause, a Napavine sophomore as well, was also a first time wrestler. He also weighed in at 120 lbs. Coach Terry was extremely proud of his ability to make it to the tournaments and his improvement.

Bradley Yarbrough is a Napavine junior, this is was his very first year on the team. He was also able to make it to the championships. He was in the weight class of 120 lbs. Yarbrough was happy to have such a successful start to his career.

Aydan Costin, a Napavine senior was able to spend his last year at the State Championship tournaments. He has been wrestling since a very young age, his parents encourage him to pursue his passions and can be found right along his side. Costin believes the mental stress is most of the work. Costin has a competitive weight class since he weighs 170 lbs. Aydan stated to the crowds at the assembly, "cutting weight is so hard. It's frustrating, you aren't able to eat everything you crave."

Napavine's students gathered around to listen to the wrestling coach and his athletes. The athletes were sent off, students forming a tunnel to pass through.

Napavine's students and staff members are all grateful to have athletes who work hard and represent the Napavine Tiger logo so well.