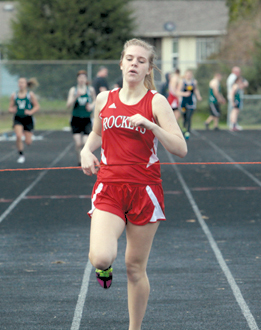 Castle Rock senior Elizabeth Moore finishes a 400 meter race nearly 40 meters ahead of her competition at a recent meet in Castle Rock. She currently holds the fastest times in District IV (Southwest Washington) in the 100 and 400 meters.

The name Moore is nearly synonymous with track and field in the local area. Castle Rock senior Austin Moore is the reigning 400 meter state champion while cousin Elizabeth Moore dominated the 200 and 400 meters for Castle Rock in the Trico League championships Friday, and still their Freshmen cousin, Courtney Moore at Toledo, is raising a few eyebrows with her sprinting performances.

Austin and Elizabeth are both seniors at Castle Rock High School.

Elizabeth's dad, Dennis Moore was a legendary sprinter in Castle Rock High School history and Elizabeth says that he is definately the reason she has been involved in track.

"I think my dad is the main reason why I even wanted to run track," said the younger Moore. "I wanted to be a good runner like him."

Through her life, Elizabeth has struggled with eyesight issues that affected her performance in the classroom and in sports.

"I was diagnosed with dyslexia when I was in first grade at the age of 7," explained Moore. "We also found out I had Poor Binocular (2-eyed) Coordination also in the first grade."

The condition affects reading, depth perception and eye contact among other things, which make many aspects of life a challenge for Moore.

"My mom and dad have helped me so much," said Moore. "School was a struggle for me but I have pretty much overcome my vision problems."

She is achieving a 3.0 (B) grade point average and looking to attend Mt. Hood Community College next school year.

She was a member of the basketball team that went to state during her junior and senior years. Moore was also part of a speedy soccer team and even spent two years running cross country. This track season, Moore has be consistently competitive in the 100 and 200 but nothing less than dominant in the 400 meters. She currently has the fastest times in the 1A District IV region in the 100 and 400 meters and has the third fastest time in the 200 meters entering district competition.

"I went to state in track my sophomore and junior year," she said.

Track runs in her bloodline, but in the coming years, the focus will need to change and colleges are paying attention to her performances on the track. To meet her goals, however, she is going to have to jump onto an academic track.