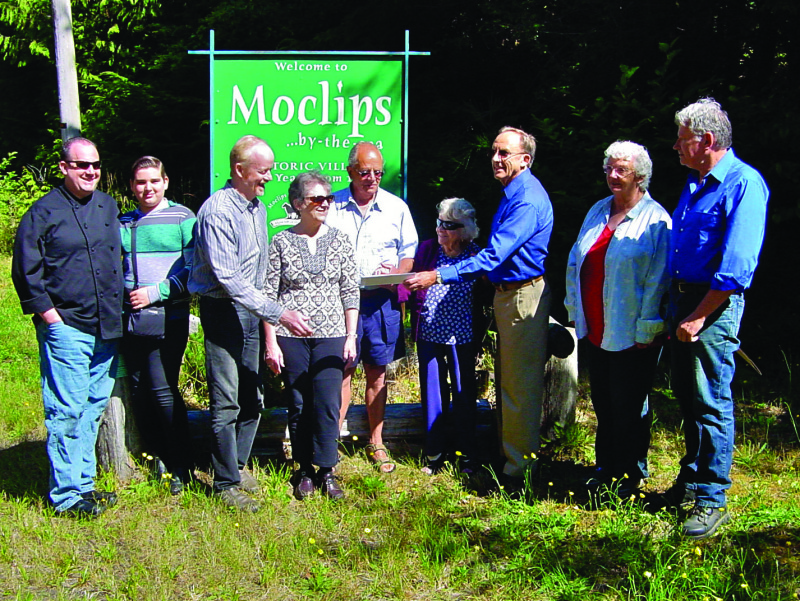 Photo by Donna Morse Rob Curtright of the Ocean Crest hands the deed to Museum president Lee Marriott (also in photo two Museum board members and the Ocean Crest family).

According to a press release from Museum of the North Beach, Executive Director & Curator, Kelly Calhoun provides the following update on the 12 year project that is looking to move forward.

The family of the Ocean Crest Resort has donated three parcels of land to the Museum of the North Beach. The property was appraised in August 2014 at $65,000 and will be the site of the new museum. The combined lots measuring 150' by 200' are located approximately two blocks south of the Ocean Crest's Recreation Center on State Route 109.

The Museum has been in operation for over twelve years and is currently located in a small but historic building formerly known as Hewitt's Frozen Foods which is owned by the Ocean Crest Resort. Our goal since 2003 has been to rebuild the iconic Moclips Northern Pacific Railway Depot as the new home for the Museum of the North Beach's ever expanding collection. For Moclips by the Sea Historical Society to reconstruct the Moclips NP Railway Depot as a Hidden Coast Scenic Byway's (SR109) featured attraction, this will be a crowning achievement for the North Beach and Grays Harbor County. It will be a tourist destination like no other.

The original plan was to rebuild the Moclips NPRY Depot in the exact location it previously occupied from 1905 until the 1950's. This site located at 4th & Railroad Avenue on the flats in Moclips is owned by Washington State Parks. Moclips by the Sea Historical Society and Washington State Parks became partners on this project. After several years of meetings, phone calls and emails, the partnership was abandoned partly due to the collapse in the economy and the changes in staff at Washington State Parks.

With this extremely generous donation by the Ocean Crest Resort, Moclips by the Sea Historical Society can now move forward on this very important and much anticipated project.