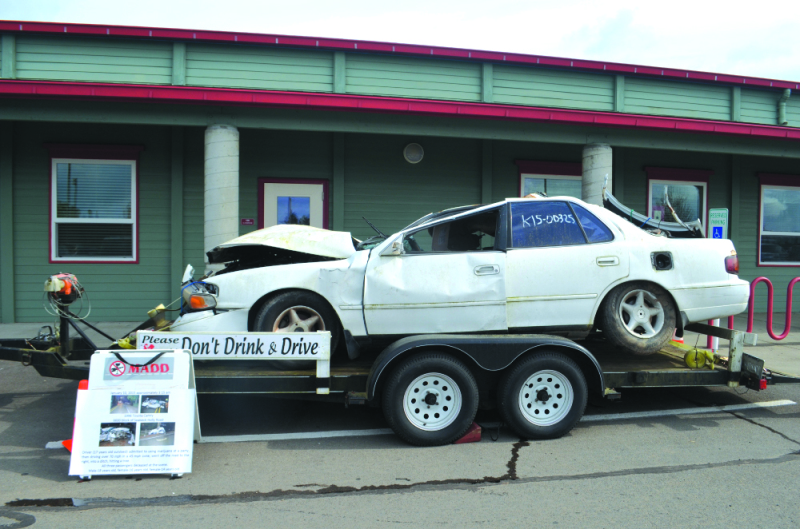 Photo courtesy of The Washington State Patrol - The WSP brought a car involved in a drunk driving crash which killed three people. This car was placed in front of the Winlock High School entrance to make students aware of drunk driving and its consequence

On Friday, April 15th, Winlock high school students and the 8th grade students sat in silence and in thought throughout most of the day. To begin, they sat in the middle school and watched a video of their classmates at a "party" and saw them get into a car after drinking. The car began to swerve and then the video cut to black, which followed with the infamous question: "What did I just do?" The story behind this mock DUI crash was students went to a party, chose to drive after drinking, and then one student got behind the wheel with three other passengers and struck another car with a mother and two small children. Judges, defense attorneys, and attorneys of the state from the Lewis County Prosecutor's Office were also present during the "trial" and sentencing of the student who drove under the influence. A mock funeral was held where close friends spoke about the life of the deceased, the older sister of the two girls killed sang a song, and the student who was the drunk driver spoke and apologized for his actions. The emotions were very real, though the car crash was fiction.

In small communities, tragedies are felt and mourned by all as small towns are one large family. The volunteers were all briefed and told to watch videos on what to expect and how to act. Even after the acting practices, the mother and the students who volunteered could not help but cry and scream when medical personal told them their loved ones had "died" in the mock crash. Some students in the audience could not handle their emotions either and would burst into tears.

The Winlock ASB and the FFA leadership class worked together to help organize this event. Patrick Jacobson, local firefighter and Winlock graduate, was a key spokesman for the fire department in helping the two clubs along the process. Jacobson helped the high school get a grant for this event which paid for all the services, coming to around $20,000. There was a life flight helicopter which landed on the football field during the crash part, there were judges and attorneys from the county court, state patrol services, the Lewis County coroner was present, and all the other fees for the services provided.

Students had the opportunity to listen to many great speakers also. Lt. John Matagi spoke about an a website and Instagram account run by the Department of Health called Listen2yourselfie.org which helps people get facts about use of marijuana and its effects. He also spoke about the opportunity we have every day to make good choices. He brought up three volunteers and two of them to turn slightly and walk forward, and one to walk straight forward. The two students who were angled missed a destination he had marked because they were slightly off-course, but it made a big difference in the long run. With this, he used the example of planes. If a plane wants to circumnavigate the world but is 1 degree off-course, the plane will end up 500 miles away from its destination. Speakers from the fire department showed videos of distracted drivers and drivers who ran red lights. There was also a demonstration of drunk goggles, which simulates your vision under the influence of alcohol.

The day went smoothly for the departments and the students. The students heard powerful messages from witnesses of crashes, parents and friends of people who were killed or seriously injured in distracted driving and DUI crashes, and many of our civil servicemen who work to help people involved in crashes. Remember, April is Distracted Driving Awareness Month. Please refrain from using your cell phone while driving, and never drive while under the influence of alcohol, drugs, or even prescription medication as these can all lead to accidents.