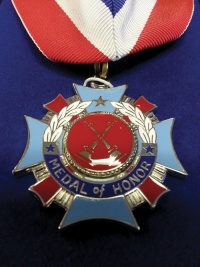 One of the seven medals of honor awarded by Lewis County Fire District 15 to educators killed during the Dec. 14 attack at Sandy Hook Elementary School. District representatives plan to hand-deliver the medals to Sandy Hook May 6.

A firm date of May 6 has been set to deliver medals of honor from Lewis County Fire District 15 to Newtown, Conn., to honor the educators who were slain during the attack at Sandy Hook Elementary School Dec. 14.

Seven medals were struck individually and are now in the possession of the fire district; one each for the families of teacher’s aide Rachel D’Avino, 29; prinicipal Dawn Hochsprung, 47; teacher’s aide Anne Marie Murphy, 52; teacher Lauren Rousseau, 30; school psychologist Mary Sherlach, 56; and teacher Victoria Leigh Soto, 27; and one to be framed and given to the school for display.

District 15 Commissioner Randy Pennington, a military veteran, said felt inspired to honor the fallen after reading how they died defending students, stating they would have qualified for the Congressional Medal of Honor had they been members of the military. Pennington’s district, however, is able to bestow the Fire Service Medal of Honor and commissioners posthumously inducted all six educators as volunteer firefighters and promoted them to the rank of captain (the highest rank available to a line officer) before voting to award them the medals of honor.

"The information that I’m getting from Sandy Hook is this has really snowballed," said Pennington of the rapid swell of support for the medals, stating high-raking members of the government and media are expected to attend the ceremony, as well as members of the National Foundation of Medal of Honor Recipients.

Pennington said the medals received a large publicity boost when Firehouse Magazine, a widely-recognized publication for firefighters, featured all six educators in their April issue as special recipients of their annual Community Service Award, while also giving recognition to Fire District 15, who had nominated the educators.

Locally, the fire districts, city councils and school districts in the Winlock, Toledo and Vader areas have offered official support of the medals while residents have generated $2,200 in donations over four months to help pay for Lewis County representatives to hand-deliver the commendations, a response Pennington described as "phenomenal."

While at the ceremony, Randy Pennington said he is expected to be the featured speaker, and joked he may be coming down with laryngitis before the trip. But he has long stated the purpose of the medals was never to generate media attention or place his district in the spotlight, but to adequately commemorate the heroic and selfless actions taken by educators who were solely concerned with protecting their students.