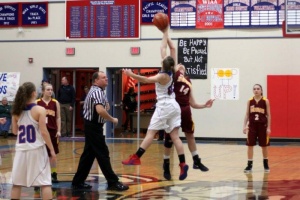 Photo by Larry Bale...Mark McClain also works as a referee.

McClain came to Pacific County in 2011 and, within two month of his hire, successfully prosecuted Brian K. Brush for the murder of Lisa Bonney. McClain also secured a first degree murder conviction in the Devon Moore murder of his father, Timothy Moore.

"It has been an honor to serve this community and the comments I have received from those I have worked with have certainly made me second-guess my decision," McClain told the Herald. "But in the end, if you have given your all and cannot support the directions of an office, you need to work elsewhere."

While McClain would not be more specific, he did indicate that he was very appreciative of the staff in the Pacific County Prosecutor's Office, as well as significant appreciation for others who work in county government as "dedicated public servants who are more than figure heads," citing Pacific County Clerk Virginia Leach and Pacific County Sheriff Scott Johnson as examples of those who, while elected, "serve this community by working side-by-side with those on the front line, something not found in every county." That is something McClain hoped the community “was aware of and proud to know.”

McClain also expressed appreciation for the paralegals in the Prosecutor's Office.

“They are truly the backbone of their office and any success I have had here could not be done without their efforts," McClain said.

McClain will also leave a void in local sports as he also served the community as a football and basketball official.

"I have enjoyed becoming a part of this community not only as a public servant, but also as a ref and have so appreciated how welcomed the coaches and fans have made me feel," McClain said.

McClain added that he will remain connected to the community and hoped to one day return to public service in Pacific County. His last day is Monday, February 17.