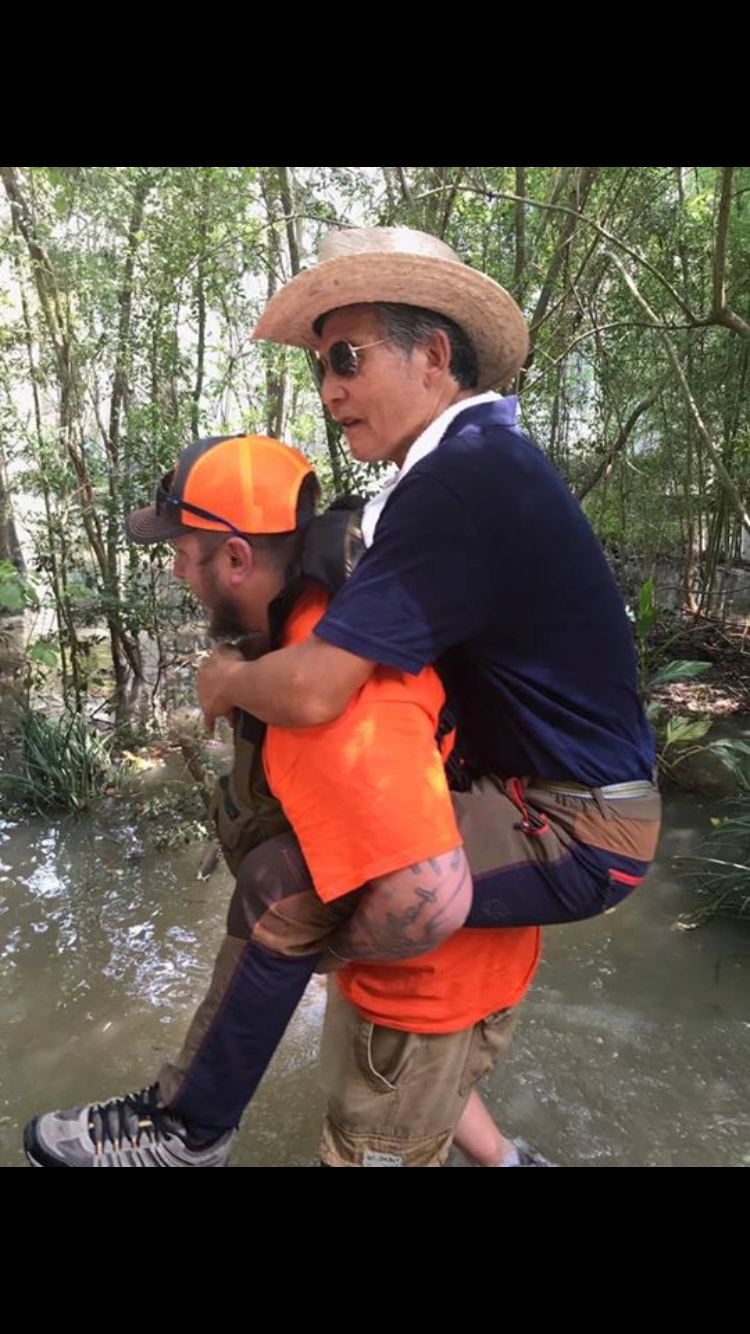 Bakken gives a piggy back ride to a hurricane victim.

Recently, Andrew Morton from Winlock, a volunteer with the Fallen Outdoors, had the opportunity to go to Texas to help with the Hurricane Harvey relief. While he was there he had the opportunity to help several people in need and work along side law enforcement and social media to figure out what towns were in need. Many were small towns like Winlock. Many didn't have FEMA or The Red Cross helping so Andrew and his group made it their mission to help.

This volunteering endeavor started with the Founder of the Fallen Outdoors, Eric Bakken, and Treasurer Branden Trager, throwing around the idea of helping with Hurricane Harvey relief and asked for volunteers. Andrew stated "I asked Shasta, my wife if I could go and she said go help save lives". Andrew and wife Shasta are husband and wife volunteers, she supports him while he is on the road.

Then on August 30, Andrew went to Wal-Mart in Chehalis where they donated supplies for the relief effort in Texas. Morton commented "The Wal-Mart's in Washington gave us so much to take down, not just the company itself but the employees as well. The community of Winlock also gave supplies and cash, it was a great way to start our trip. We then went to The Founders residence where we loaded 3 trailers with supplies and a boat (which also had supplies inside). "The following day we were on the road to the big state of Texas", he continued.

After driving straight through, they arrived in Plum Grove, Texas after only two days on the road. We stayed in Plum Grove for the duration of the trip, staying with another volunteer with The Fallen Outdoors. Our first stop was the fire department station where they needed supplies, we dropped one trailer there with much needed items" Morton continued.

"After that we went to downtown Houston, 3 blocks away from the police station and that is where half of us starting doing search and rescue with the boat. Then we got a tip that one of the relief centers had recently closed and we were able to re-supply them with food and water. During the search and rescue, we met a man who wanted to go back and rescue his 3 cats. We were able to get him his furbabies and he was a very happy man" stated Morton "The Founder gave him a piggy back ride because the water level was too high" he continued.

Another man we met, wanted to go back and get some personal items and he was able to recover many of the items he wanted and needed.

"We hooked up with Law Enforcement in Houston, they wanted us to go door to door to check on individuals who may have been stranded by the water, we were cautious in doing this so not to attract looters" stated Morton. "Looters were everywhere, if it wasn't nailed down it was taken."

It was an eye opening experience, to see people in desperate need, it had already been going on for 5 days. What people didn't understand is these affected community had no electricity so no way to get cash to buy needed items, cars were submerged so they had no transportation. People were relying on the supply drops and emergency relief centers for water" stated Morton.

"As we got donations in from Facebook via paypal we would go outside of the effected areas to get supplies and then bring them back in for the people in need. While they would do the live feed, people would donate and also people in the stores would donate items as we purchased them. This was humanity at it's best, no politics, American's were in need and we were there to help" continued Morton

Winlock is home to the Morton family, we know if anything would happen here, they would be the first ones to give up their time to help others.