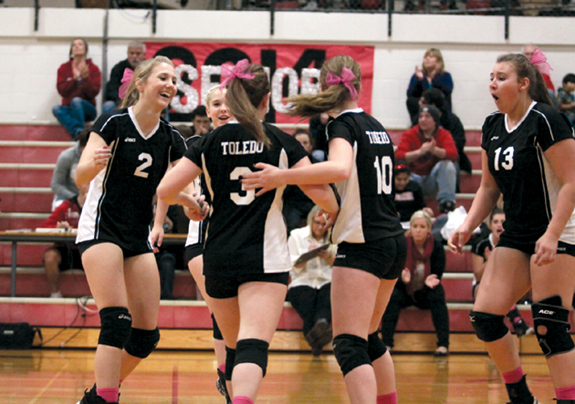 Castle Rock's Nate Williamson brought the lunch pail to the Rocket's 35-0 defeat by Kalama on Friday night. Williamson finished the game with 93 yards of rushing.

All three of the local volleyball teams have struggled to put may marks into the win column this year, but they have certainly enjoyed playing together. Thus far, Winlock has been unable to claim a victory but they are still working.

"Even with all changes and we are all still really close as a family. Varsity hasn't had any wins under our belt but we are still working on it but our J.V. girls got two wins and they are doing so well," continued Fitzgerald. "We all have a lot we want to accomplish this year, especially us seniors."

"Our team is improving so much from our previous years and our new coach is great," said Winlock Junior Sherylynn Hazlet. "She really knows what she is doing. She is very close to our own age, so we can relate a lot."

Across the freeway, things have not been a whole lot better. The Toledo volleyball team opened with a victory against Winlock and have earned a second victory over Ilwaco.

"They are still working hard," said Toledo Coach Whitney Luchau. "I told them that we get to replay Woodland, Kalama, Castle Rock and Ilwaco, so it is a good opportunity for us to give 100% and see where that takes us. I know we can win, it is just a matter of them changing their mindsets to believe it."

The Castle Rock volleyball team also has two victories under their belt including one over Toledo and continue to work hard.

Graduation and off-season tragedy took a huge percentage of the team that won the state championship a year ago. Toledo pays a visit to Castle Rock later on Oct. 22.

Some seasons are not about winning and the post season. It is still a matter of kids learning about relationships and teammates through adversity.