Local travelers have once-in-generation experience while in Japan 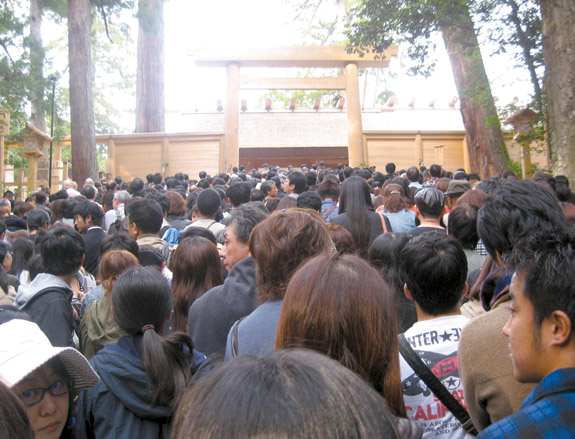 A crowd awaits entry to see the main shrine at Ise Jingu, which is rebuilt every 20 years to pass traditions of craftsmanship to younger generations. Delegates from Lewis County visited the shrine Nov. 2 as part of a cultural exchange program.

Every 20 years, the shrines of Ise Jingu, in Mie Prefecture, Japan, are entirely rebuilt.

Not because there was anything wrong with the old ones, but so the techniques and craftsmanship required to build such shrines are not lost to the younger generations.

It is exceptionally special to visit Ise Jingu on these twentieth years (though the shrines are otherwise frequently visited as the most sacred in the Shinto religion) and earlier this month a group of cultural exchange participants from Lewis County were able to visit on just such a year.

Ten individuals from across the county, as well as two from Oregon and California, represented Chehalis as official delegates to the city of Inasa, as part of the two towns’ ongoing sister city relationship. The guests, which included Mike and Di Morgan, as well as Dennis and Bonnie Clark, all of Toledo, and this reporter, were able to stay with host families during the week-long trip and were treated to a number of destinations representing the culture of both the local area and Japan as a whole.

Their visit to the Grand Shrine of Ise, as it is known in the West, took place Nov. 2 during a three-day holiday weekend encapsulating both National Culture Day (a holiday celebrating the announcement of Japan’s post-war constitution in 1948) as well as Shichi-Go-San (a Shinto holiday where children on or around the ages of 3, 5 and 7 are given a ritual cleansing by a Shinto priest to prevent bad luck).

As a result, the shrine was packed with tourists and pilgrims all vying for an opportunity to offer a prayer and a request for luck to the shrine’s goddess, Amaterasu, considered to be the primary deity in Shinto.

It is said Amaterasu, the ruler of Heaven and of the Sun, is the divine ancestor of the Emperor of Japan. A mirror once used to lure her from a cave is also enshrined at Ise Jingu and is considered one of Shinto’s three most significant relics. (The others are a sword establishing the Emperor’s divine lineage in Nagoya and a jewel used by Amaterasu to create other deities in Tokyo.)

While visitors, and indeed no one other than clergy, were allowed within the shrine’s sanctuary, or Honden, they were allowed to approach the hall of worship, or Haiden, to ring a ceremonial bell and offer their prayers and coins to the god’s of Shinto.

Afterward, they were given an opportunity to enjoy several cultural performances taking place at Ise Jingu that day, as well as a chance to visit the local, and equally-as-busy, souvenir shops just up the way.

While a large number of Japanese people do not identify with a specific faith, Shinto remains a significant part of Japanese culture and signifies a large part of their nation’s heritage. Shrines both large and small can be found in numerous places around Japan, and are oftentimes next to or incorporated with Buddhist temples.

When Mike Morgan reflected on his visit to Ise Jingu, he noted it was significant to have visited the chief worshiping place of one of the world’s religions, stating he had only otherwise been to the The Vatican and Salt Lake Temple.

It was this reporter’s first trip to any such revered establishment and I would certainly recommend a trip for the adventurous and the curious, especially if you don’t mind waiting 20 years, or for National Culture Day.